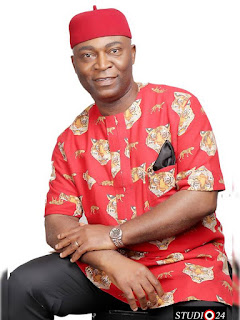 Barrister, Solicitor and Advocate of the Supreme Court of Nigeria. Called to the Bar in 1986

Member, Imo State House of Assembly (1991 – 1993) Provided a vibrant voice in the House, and backed several bills and motions. Was Secretary of the House Committees on Justice, Judiciary and Law Review, and Commerce, Industry and Tourism, respectively.

Hon. Commissioner for Works, Housing and Transport, Imo State, (2001 – 2003). This era witnessed massive road construction and reconstruction across Imo State, as well as tremendous infrastructural development, included but not limited to, the State Secretariate complex, Nekede Exclusive Gardens Estate (popularly known as Udenwa Estate), Redemption Estate, among others. The State Transport Company, ITC was revived and rejuvenated, and equipped for the first time with luxury buses.

Hon. Commissioner for Information and Culture, Imo State, (2003 – 2006). My tenure was marked by vigorous sustenance of the State’s Cultural Festivals such as Ahiajoku and Ozuruimo, and coordination of the first ever Igbo Day Celebration, which was hosted at Owerri. An Imo contingent was sponsored to Japan for an International Cultural Festival. On the information side, I oversaw the rehabilitation of the Imo Broadcasting Corporation (IBC) studios, transmitters and other facilities, ensuring that the station was hardly off air. I initiated the first ever weekly post-Executive Council meeting press briefing, and recorded over 80 press briefings, one of the highest in the history of that Ministry. Ensured that many Okigwe sons and daughters were employed in the ministry and its parastatals.

Coordinator/Government Representative, Heartland Football Club. (2006 – 2007). I mid-wifed the process of returning the ownership of Iwuanyanwu Nationale to the Imo State government, and its re-naming as Heartland Football Club by the state government. Shortly afterwards, I led the club to the 2006 CAF Confederations Cup tournament, where it defeated teams from Egypt and Cote d’Ivoire, thus advancing to the group stage.

Secretary to the Government of Imo State, (June 2006 – May 2007), (May 2007 – August 2007). Saw to the efficient and effective coordination of government ministries, departments and agencies. Having served dutifully as Secretary of the State Executive Council, the engine room of government, and as a key member of the State Security Council, where all sensitive security matters affecting the state were discussed, my era was marked by rigorous application of the Civil Service Rules, and other conventions of proper governance, maintaining sanity in government, unlike what obtains at present, where it appears that anything goes. During that period, I led the government team that severally and successfully engaged with the Labour Unions, averting numerous strikes. At that time also, we strictly applied the rules of autonomous communities creation, and recognition of traditional rulers.

Federal Commissioner, Fiscal Responsibility Commission, (The Presidency) Abuja (2008-2013). We fulfilled the Commission’s core mandate of ensuring macro–economic stability through the instrumentality of the Medium Term Expenditure Framework in the budgeting process, and financial management by scheduled Government Ministries, Departments and Agencies (MDAs). I was able to secure employment both within the Commission and elsewhere for a large number of persons from the South East, particularly from Imo State. Two of them are now heads of departments in the Commission. I equally installed an Imo son as the Commission’s Secretary, whose emergence as the Acting Chairman of the Commission at the end of my tenure was facilitated by me. It is a position he still occupies.

Deputy Director-General, Ikedi Ohakim Governorship Campaign Organization (2011).  Our records show that we worked extremely hard to win that election, but were rigged out due to some political issues of the period.

Director-General, Emeka Ihedioha Governorship Campaign Organization (2015). Delivered the candidate at the primaries, but our efforts were sabotaged at the general elections.

*I am a successful entrepreneur and businessman, with links in most parts of the world.

*I am a human capital developer.

*I am an empowerment benefactor, having awarded several academic scholarships, and sponsored many to myriad skills acquisition programmes.

*I am an employment link and generator, having caused or effected the employment of innumerable persons in both the public and private sectors.

*I am a social mobilizer.

*I am an erudite scholar/political strategist.

*I am a prudent philanthropist.

*I am a man of valour and integrity, imbued with the fear of God.

*I have received numerous awards and accolades from local and international bodies.

*I am a Christian, and married with children.

TO GOD BE THE GLORY

To initiate and push progressive legislation for the betterment of Okigwe people, with special emphasis on transparency and accountability.

To leverage on the processes and powers inherent in the position of Senator to attract every available dividends of democracy for Okigwe Senatorial Zone.

To lay emphasis on human capital development through education, entrepreneurship and capacity building programmes for our youths and women.

To ensure full inclus and regular face-to-face interaction with constituents, for effective feedback and impactful response.

To vigorously propagate and pursue the imperative  restructuring as an invaluable device for nation buildin
To ensure that the twin menace of Cattle Herdsmen and insecurity are tackled head-on.

To advocate for t cessation of any further consideration of t establishment of cattle colonies, the pr ways and adjoining lands, and similar vexatious ventur
To intensively lobby to attract any socio-economic or political incentive/programme  circumstances may occasion, for the betterment of Okigwe Sen
To ensure that Okigwe has an audible and well respected voice at the National Assembl