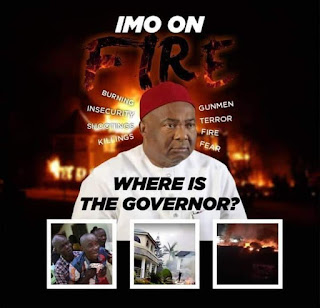 UZODINMA: DANCING ON THE GRAVES OF INSECURITY VICTIMS

I feel very sick. My heart bleeds. My eyes are wet. For the life of me, I cannot understand the reason a government would go on air to rationalize the ravages of insecurity and the brutal murder of our fellow citizens. This issue breaks my heart, and I sincerely feel the worst moment to be an Imo person is obviously now. 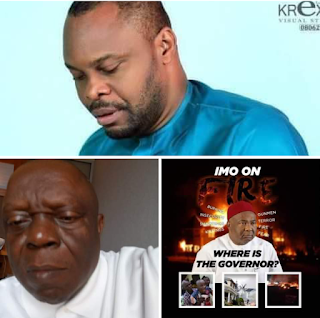 Today, the Imo State Commissioner for Information, Declan Emelumba, went on air and said a number of things. First, he blamed the innocent IMSU female student and the poor driver who were allegedly shot dead by security operatives close to the Government House for their death, and hailed their killing on the premise that they went close to "a high security area" and that the security operatives acted in line with self-defense. How could someone talk of self-defense as a justification for the killing of totally unarmed citizens? Not a word of condolence. Not a sign of empathy. Not a show of sympathy to their unfortunate demise. The spokesperson of the government simply heaped the blame for their death on them. This is pathetic!

Those victims were people's sister and father. They were people's daughter and brother. They were people's friend and husband. But their lives were cut short for nothing. Their aspirations were abbreviated. Their dreams were aborted, and they were untimely handed over to death by the bullets. And today, their death is being justified by those whose responsibility it is to protect and shield them from harm.

This is the mindset of the regime: the people deserve every evil that befalls them. Last month in Ihitte Uboma, two siblings were  murdered in cold blood by suspected security operatives. There was never any reaction from the regime of Uzodinma. No visit, no condolence, no investigation! In the aftermath of the invasion of Orlu, dead bodies of innocent citizens littered the streets, and when the missiles unleashed on the people of Orsu by the airstrikes ordered Uzodinma wreaked havoc on the lives and property of the people of that area, nothing was heard from the regime. On a daily basis, Imo people pass through the most excruciating torment, torture and even violent death as a result of insecurity, yet the regime looks the other way, and Uzodinma hibernates in a cozy lodge in a faraway Abuja.

The latest outing by Uzodinma's commissioner has lent credence to all insinuations that the safety of lives and property in Imo State is the least of the worries of Uzodinma. Any flickering hope therefore that the regime would address the insecurity in the State and protect the people was today dashed completely. But what hurts Imo people even more unbearably is the celebration of the death of our fellow citizens by this regime of infamy.

Yet, going on air to accuse radio presenters of working for the opposition simply because they sought to set the records straight about the origins and drivers of insecurity in the State was a new and condemnable low by the regime. When Uzodinma went to Abuja and openly claimed that he ordered the carnage in Orlu, what response was the regime expecting? What reactions was Uzodinma anticipating from those he had earlier described as militants? It is nightmarish that responsible governments across the country are working out modalities to stem the tide of insecurity, and in Imo the regime is looking for whom to accuse and whom to blame.

It is time for Hope Uzodinma and his appointees to stop dancing on the graves of our dead compatriots. The streets of Imo are red with blood and the Uzodinma must act fast to save the people who he pretends to govern.