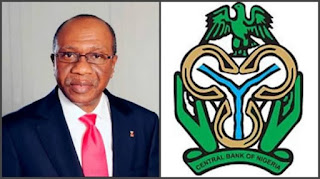 Governor of the Central Bank of Nigeria (CBN) Godwin Emefiele is expected to appear before the House of Representatives’ Public Accounts Committee to render the bank’s audited accounts this Thursday.

Chairman of the Committee, Wole Oke, said they would be expected to render accounts from 2014 to 2019.

Oke said they had written to the CBN but the Bank’s Governor could not come but asked a senior director to appear last week.

“We had written CBN just like we had written every other corporation to come to the parliament to show us evidence of rendition of their audited accounts.

“So the director appeared on behalf of Central Bank and he took a date. So we would be expecting them to come with copies of their audited accounts for the period under review and evidence of rendition to the Auditor-General,” he said.

The CBN shall be appearing before the lawmakers on the investigative hearing into the audit query issued by the office of the Auditor-General of the Federation (oAuGF).

He said although the office of the Auditor-General cannot directly audit accounts of corporations as the CBN, it has powers to conduct periodic checks.

“For purpose of clarity on whether CBN complies with rendition of accounts and powers of the Auditor-General to audit Central Bank account, the constitution has settled the matter in Section 25 sub 3.

“Secondly, the external auditor that these corporations engage are engaged based on the advice of the Auditor-General. As a matter of fact, the auditor general must accredit those external auditors.

“The Auditor-General in turn engages consultants or their personnel to review the audited account submitted by these corporations, and thereafter make his report before the parliament.

“In any case, the Auditor-General’s office is an independent office. They are not under anybody’s control except the parliament, because this committee pursuant to Order 18 Rule 6 oversights the office of the Auditor-General of the federation,” he said.