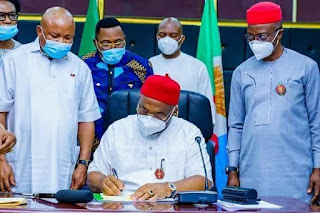 A budget simply means an estimation of revenue and expenses over a specified future period of time and is usually compiled and re-evaluated on a periodic basis. It is no longer news that States in the Southeast have reeled out their proposed budget for the year 2021. An overview of the 2021 budget for States in the  Southeast shows that Imo tops the list with a proposed budget of N346bn. Abia proposed N131bn, Enugu N170bn, Anambra N144bn and Ebonyi N122bn.

It is interesting to note that the budget for Imo State Government is twice as much as that of any of the States in the Southeast. Based on imperical realities on ground, there is no economic rationale behind the ridiculously high budget estimate of N346 bn proposed by Gov Hope Uzodinma. Taking a cursory look at the badly damaged economy of the State, any reasonable person can rightly assume that the budget is not realistic and at best designed to siphon the Imo.

It might interest one to note that as at December 31, 2020, Imo State Government recieved about N54bn from the Federation Account (FAAC) and internally generated over N16bn. This means that the State made an income of about N70bn in the year in review. Presently the debt stock of Imo as at middle of 2020 stood at  N158bn. Every patriotic Imolite can testify to the fact that there is nothing on ground in the State to justify the N70bn that accrued to the State in 2020. There are no serious infrastructural development in the State, while workers and pensioners are owed several months in areas. Government industries such as Adapalm, Avutu Poultry and the rest are moribund while the State's revenue regime remains epileptic and a mirage.

With the decayed infrastructural condition of the State, government industries non-functional, demoralized civil service, disorganized private sector and a debt profile of over N158bn, how does Uzodinma hope to generate the sum of N346bn? It might further interest one to note that States that have experienced unprecedented development like Ebonyi, Enugu and Anambra recieve far more lesser funds from the Federation Account than Imo. In 2020 Ebonyi got about N36bn, Enugu recieved about N40bn, Anambra got about N39bn, while Imo got a whopping N54bn. If Ebonyi could build first class roads and about 10 flyovers using Julius Berger Construction Company, why couldn't Imo do same especially when it recieved much more from the FAAC?

It is sad to note that in spite of the State's heavy investment in infrastructure, the debt stock of Ebonyi as at middle of last year stood at N46bn while that of Imo stood at a gigantic N158bn, with little or nothing to show for it. This clearly shows that the development of any State is not predicated on over-bloating the budget like Uzodinma did, but on fiscal responsibility. Good governance doesn't emanate from over-bloating or, like some believe, padding the budget.

Instead good governance can only be given by a responsible leadership that has the interest of the people at heart. How can Uzodinma implement his shared prosperity programme with such an unrealistic and laughable budget? From hindsight one can see clearly that this budget is subtly programmed to further impoverish majority of the people and enrich the pocket of a few elites. Conversely, it has become crystal clear that this government doesn't have the interest of the people at heart and is at best clueless on how to move the State forward.

On the other hand, one can rightly say that the economy of the State presently is a clear contrast from what it was when Rt. Hon Emeka Ihedioha was governor. The evidence is there for all to see as even the common man in the streets can testify to that fact. During Ihedioha's brief stint Imo won several awards as the State with the best fiscal management and due process. But today, the reverse is the case. In Igbo parlance, there are two types of wives, one is the "oriaku" and the other "okpata aku". It is also a popular saying that when a man marries two wives he would be able to ascertain which one is better. Between Ihedioha and Uzodinma, Imolites have married two wives and am sure they now know whom the better wife is. They also have discovered amongst the two which is the oriaku and mkpataku. May GOD Almighty help Imo State.

I rest my case.