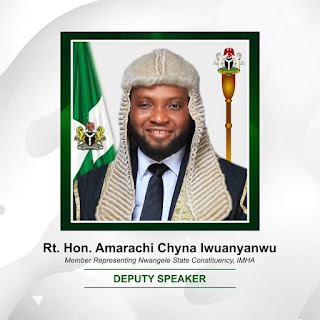 The Deputy Speaker of the Imo State House of Assembly, Rt Hon Amarachi Chyna Iwuanyawu at the plenary session yesterday in owerri, moved a motion seeking to relax some portions of the House rules, the said House rule, "Order 11, rule 61, 62 and 63, states that " any Honourable member that misbehaves will be suspended for that sitting if the offense is not considered serious, but where the said offense is considered to be a serious offense, the offender will be suspended for a period of two weeks."

Members, pending when the House members decides to lift such suspension.

While commenting on the motion the member representing Njaba State Constituency, Rt Hon Uju Onwudiwe expressed her joy towards the amendment of the said rules,

According to Igolo, "Those who elected us are always watching all of our footsteps, voices and behaviours in all we do here , we have to sit-up and put on lifestyles and behaviours worthy of an Honourable member, there should be difference between our lives then, and now that we are elected Honourable members. She commended the Deputy Speaker for such a wonderful motion.

This motion is calling on all of us in this hallow Chamber as Honourable members to be disciplined while discharging our duties as lawmakers,

"We are mirrors from which Imolites and beyond assess the government of the day, before we were elected, we must have proven that we were disciplined personalities and these amendment will help us to maintain it here in the Assembly, he said.

"The motion is purely on the ethical conduct of the House members, according to Hon Duru, " the situation where a House member(s) have acted dishonourably, it will attract punitive measures , we have House rules, order 11, rule 61, 62 and 63 detailed what actually happens in the House, we are supposed to show good examples, People should look at us as epistle to how House  members should behave,

" It will be an aberration or misnormal if a House member should conduct his/ herself dishonourably, the punitive measures of the House is two weeks suspension, but after critical evaluations, we discovered it is not enough to deter someone from misbehaving, so in order to curb such excesses, to maintain decorum in the House and create an Honourable atmosphere, we have decided to relax the rules,

The House have the capacity to relax any rule we feel does not go in tandem with how the House should move.

"We have left the punitive measures to the discretion of the House, it lies with the House to determine the Intense and duration of the suspension that will be meted out to any Honourable member that behaves dishonourably, he said.

The House however adjourned till February 9th, 2021.