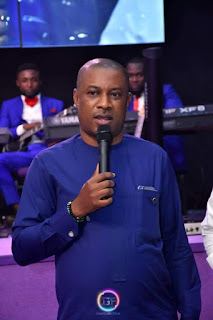 It's not out of place for any pundit to posit that Elaine Maxwell had Amb. Uche Ogbuagu in mind when he posited, "my will shall shape the future! Whether I fail or succeed shall be no man's doing, but my own. I am the force, I can clear any obstacle before me or I can be lost in the maze. My choice, my responsibility, win or lose, only I hold the key to my destiny". This statement succintly portrays the life of Amb. Uche Ogbuagu. Amb. Ogbuagu has not only carved a global niche for himself, he has allowed his passion to drive him into fulfilling his destiny to the glory of God.

Amb. Uche Ogbuagu is a change agent, result-oriented, mobilizer of men and resources, mentor, a defender of the oppressed, avid advocate for an egalitarian society, father figure, genuine philanthropist extraordinaire with a heart of gold and love. Amb. Ogbuagu believes in the philosophy that one can only use the power of love to overcome the love of power.

Highly cerebral and gifted, Amb. Uche Ogbuagu is an employer of labour and the proud owner of four flourishing radio stations and a television station in the offing. Myradio Fm and Gold Fm in Akabo Ikeduru, Imo State, Real Fm in Aba, Abia State and Majority Fm in Port Harcourt Rivers State. He has a knack for excellence, and has used his position to touch many lives within and outside his constituency.

He was born to the family of Late Pa Alexandra and Madam Lovendar Ogbuagu on August 17, 2020 at Amii Akabo, Ikeduru LGA of Imo State.

Before his political sojourn, Amb. Ogbuagu was a self employed Chief Executive of an Entertainment Media Advertising Firm, sat on many boards,  the Head of Creative Media Department of the famous Transformation Ambassadors of Nigeria (TAN). In 2011, Amb. Ogbuagu was appointed Special Assistant to the Governor of Imo State on Entertainment and Chief Comedian of the State, and he later became the Senior Special Assistant in 2013, a position he used to foster unity among artists and entertainers in the State under the auspices of Imo State Bureau for Entertainment. Before joining Politics, he was the Chief Executive of four radio stations, namely, MyRadio 101.1 and Gold 89.3 FM Owerri, Real 99.1 FM Aba and Mejority 89.5 FM Port Harcourt.

EXPLOITS AT THE 9TH ASSEMBLY

On 13th June, 2019, Amb. Uche Ogbuagu was inaugurated as the member representing Ikeduru State Constituency in Imo State House of Assembly. His tenure as a state lawmaker has witnessed unprecedented achievements. He has placed the name of Ikeduru on global map and is among the first lawmakers to sponsor bills and motions in the current  Assembly as constituted.

His motions on the recovery of government properties allegedly converted by the immediate past administration, and his motion on the deplorable state of roads in Ikeduru, especially the Owerri Okigwe road at Ekemele Akabo, and most recently, the Bill which repealed pensions and gratuities to former governors and their deputies, former speakers and their deputies, the licensing of Oil Mills  are not only patrotic but has portrayed him as one with a clear cut idea of what he wants to achieve for his people. He has also co-sponsored other bills and motions. His views are not only respected by his colleagues in the House, he has become a rallying point among his colleagues members, no wonder why he was elected as the Majority Leader of the 9th Assembly.

2. Drilling of 15 boreholes across Ikeduru

5. Appointment of 21 Special Assistants on Community Matters from across Ikeduru who are under his payroll monthly

6. Sponsoring Ikeduru Festival of Praise in 25 centres across Ikeduru which cost millions

16. Drilling of borehole at the stadium

17. Building of a 1000 capacity Spectator stand at the stadium

18. Building of VVIP stand fully air-conditioned with convenience, Press Gallery, and a modern public convenience at the same  Stadium.

19. Donation of sound proof generator to the stadium

20. Building of a Children's recreation center at the stadium

21. Putting of street lights at the stadium

22. Linking the stadium to the public Power supply.

23. Building a modern police station and Officers quarters at Akabo, with borehole, donation of patrol van and powerbikes to the police.

24. Attracting various roads across Ikeduru, which will begin soonest

26. Giving employment to the unemployed by building two radio station at Ikeduru

27. Empowering market women selected by their leaders across Ikeduru

28. Constant paying of Hospital bills for the indigent in Ikeduru

33. Donation of 300kva Transformer to Azara in Umunoha ward in Mbaitoli

39. Empowerment of Ikeduru indigenes and others with industrial sewing machines

40. Empowerment of Ikeduru indigenes among others with motorbikes

41. Constant distribution of welfare materials to Ikeduru, Mbaitoli indigenes including other people from outside the area.

Amb. Uche Ogbuagu is married to delectable Mrs. Nkeiru Uche Ogbuagu and the marriage is blessed with six beautiful children.

Amb. Uche Steve Ogbuagu could be aptly described as the BIRNAM WOOD which has come to the DUNSANINE HILL in quality representation of Ikeduru. He has shifted the paradigm and changed narrative of representation of the area as his achievements is well written on the lips of all Ikeduru indigenes, both at home and in the diaspora.

His stability, accountability, polite nature and peaceful disposition has endeared him to both supporters and critics, who have described him as AMBASSADOR PROJECTS.