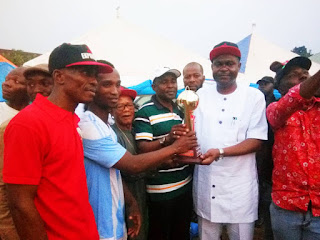 It was a dramatic display as bother teams lost scoring chances and few yellow cards awarded to both sides. However at the second half of the game Ikeji Chikwado from Ndiuhu displaced the goal keeper as he netted the first goal of the match. He later scored a penalty to make it two goals to nothing .Ndiuhu defense were alive to their task as they mounted walls of defence to secure a 2 --0 win against Mgboma.

Dr. Ihekweme was pleased by the display of football artistry and promised to enlist the best players into Heartland senior Team to further their careers.

The CEO of Ekpukekpu Foundations Chief Raph Osueke was pleased by the performance of the winning team and handed over cash prices to the runners up and distinguished players and promised to do more in subsequent competions.

The Ekpukekpu Foundations will also carry out the annual empowerments for the vulnerables in  first week of January 2021.