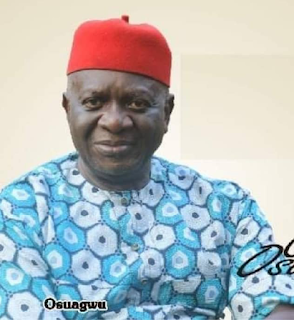 Prof. Chidi Osuagwu says he has resolved to run for the position of the President-General (P-G) of Ohaneze Ndigbo, in response to the calls by Igbo patriots across the world.

Osuagwu disclosed this at a news conference in Owerri on Wednesday, where he officially declared his ambition to contest for the post.

The News Agency of Nigeria learnt that the position has been zoned to Imo, after Enugu state, where the current P-G, Chief Nnia Nwodo, hails from.

Osuagwu said he decided to join the race after seeking God’s endorsement and due consultation from his family, friends and those who believe in the Igbo cause.

“I wish to announce to you today that I will be contesting for the president-general of Ohaneze-Ndigbo.

“This decision was born out of my conviction that with a leadership built on integrity, we can make the future we seek for.

“The tasks before us are enormous, we have a responsibility to recalibrate the Igbo homeland economy by building confidence in our people both in Nigeria and in diaspora,’’ he said.

He said that he would strive to promote mutual understanding and peaceful coexistence between the Igbos and people from other ethnic nationalities.

Osuagwu gave an assurance that he would strongly uphold the dignity of the Igbos and protect the sanctity of their culture.

He further promised to foster the leadership that would seek to end the alleged marginalisation and deprivation of the South-east.

“It will be my primary goal and objective to seek for ways to unite all in the greater Igbo family, seek to understand rather than ostracise the younger generation and better guide them towards their future.

“The agenda for a president of Igbo extraction in 2023 shall be our priority.

“But we must make relevant consultations to ensure we do not present unmarketable candidate to Nigerians,’’ Osuagwu said.

He regretted that the leadership of the apex Igbo socio-cultural organisation had suffered systemic failure in the past.

He, therefore, promised to rekindle the legendry Igbo spirit to be able to rise to the ocassion, whenever the need arose.