US holds up Ngozi Okonjo-Iweala appointment as WTO Director-General 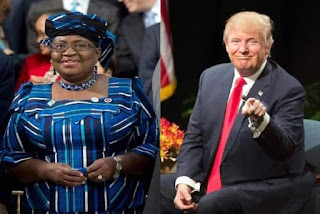 Nigeria's Ngozi Okonjo-Iweala was slated to be the new Director-General of the World Trade Organization. She will be the first woman, and the first African, to lead the institution. But there was an unexpected glitch in the process.

In a last ditch move, the United States representative at World Trade Organization took to the floor to insist that South Korea’s candidate remained a contender, and that Washington will not recognise Okonjo-Iweala as the consensus candidate for appointment as director-general.

In response to this, the General Counsel has postponed its announcement of the new Director-General until a further meeting, which is scheduled for 9 November; after the US presidential elections.

A panel at the WTO recommended her today for the position.

Today’s announcement that Ngozi Okonjo-Iweala is to be the new director-general of the World Trade Organization would have been a tremendous boost for Africa and lines her up for one of the toughest jobs in the international system.

Our sources in Geneva say that she had won the support from the vast majority of member states, including the EU, Japan and China, but not the United States.

She will have to lead the charge for a revival of multilateralism, in the negotiating chambers of the WTO and for a better deal for developing economies, as well as for the practical matter of how reforming trade and patent rules can allow the distribution of life saving vaccines and therapeutics as the coronavirus pandemic rips across the world on its second wave.

As the first woman and African to head the trade body, Okonjo-Iweala has shattered a couple of ceilings at the same time. She also has a chance to put Africa’s plans to build the world’s biggest free trade area on the top table, pointing to the productive and market opportunities on the continent.

At the same time, she has won the race for the job from hell. That much was clear when her predecessor – Brazil’s Robert Azevêdo – quit the post early after years of frustration at the logjams in negotiation on reforming the WTO.

Those negotiations have been made harder still by the eruption of a trade war between the US and China alongside sporadic outbreaks of economic nationalism across the globe.

Surely this must be the worst time to take over an organisation dedicated multilateral trade agreements, The Africa Report asked Okonjo-Iweala during the campaign. “Multi-lateralism has never been needed more than now,” she said.  “The COVID-19 pandemic has shown that this is the time we need to act in solidarity to have multilateral solutions, because there are simply some things in the world that bilateral or even sub-regional solutions cannot solve.”

On the distribution of vaccines and drugs to fight the pandemic, Okonjo-Iweala said she would prioritise open access: “Being involved in COVID-19 and vaccines now as the chair of GAVI and an envoy on the Act accelerator, I’m seeing it from the front lines and we want to make sure that we don’t have a situation where access to vaccines for other countries where they are not made is blocked … The world is so interconnected now that no one is safe until everyone is safe, and no country is safe until all countries are safe.”

This, she acknowledged, will take tough negotiations with the drugs companies and with national governments but she insisted it would take top priority: “This is an area where we really need to think through the trade regime and the rules that will govern these kinds of products, whilst respecting country’s desires to do a minimum for their security.”