Pacifism, Humanism and October 18th in South Africa; the need for Immortalization of Lucky Dube (1) 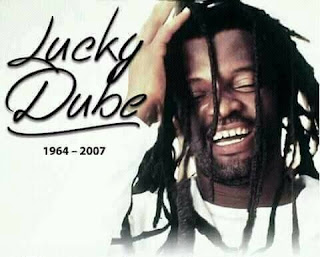 The history of South Africa in modern times is incomplete without the prejudicial occurrences in the apartheid era that divided the nation in racial lines. A lot of voices rose against the injustices that were meted on the blacks in their own ancestral homes hinged on apartheid,  a system of enforced racial segregation and discrimination in South Africa that lasted between 1948 and the early 1990s.

Many were killed, maimed and so many others disappeared without traces as history did them the gravest injustice ever, by forgetting that they ever existed as they occupied unmarked graves without records of their efforts. Steven Biko was one of the most notable victims of Apartheid system.

Steven Biko as a student  founded the South African Students Organization, which later became the Black Consciousness Movement, but his political activity led him to be expelled from  university in 1972. In early 1973, the government tried to silence Biko by prohibiting him from speaking in public or from talking to more than one person at a time.

He was not allowed to leave the Eastern Cape province and he was forbidden from writing publicly or speaking to journalists.His testimony gave impetus to the Soweto Uprising – a student demonstration which police reacted to with fierce brutality, killing hundreds of young people.

Biko was arrested at the height of the Uprising and held in solitary confinement for 101 days.He continued to campaign against apartheid on his release and adopted a disguise as police pursued him, according to South African History Online.After being arrested at a roadblock, Biko was beaten by police while in custody and suffered a brain haemorrhage. He died alone in his cell in September 1977.

This article is not about Biko of blessed memory but rather about South Africa’s greatest export to the world, no disrespect to other artists that are from the rainbow Nation, the likes of Hugh Masekela, Yvonne Chaka Chaka and more, but its about the one that stood out for his gospel and philosophy,  the legendary Reggae Star, Lucky Dube who was killed in the evening of October 18th 2007.

Apart from those that were killed during the apartheid struggle , Mandela was among the most prominent voices against the  social system of the South Africa which he spent 27years in prison for and later became the president of South Africa, but the likes of Dube , Steven Biko are the living reality of the spate of violence in South Africa during and after the apartheid era as South Africa is the country found to have the second highest rate of gun-related deaths in the world at 9.4 deaths per 100,000 people in 2015 second to only USA.

Outside the likes of Shaka Zulu and other prominent forces that tried to knit the nation together and stood against oppression and suffered so much pain, defeat and recorded victories as well ,Lucky Dube remains unarguably  among the strongest of character to emerge in South Africa, with the contents of his lyrics, he can easily be adjudged as the most precious  diamond of the rainbow nation, the great ambassador of the symbolic ‘RAINBOW’ that Madiba coined to influence an understanding of the new reality in the existential challenge of South Africa.

At a time of uncertainties,  when every black in south Africa out of tribal loyalty, was affirming the need for total deconstruction of the social system as an acceptable race card for the injustice that the blacks had faced from the white, he was one of those that was most independent and original with his perspectives and view, risking the dangers of falling out from tribal support and losing love of his people.

He bravely gave the world and South Africa one of the greatest lines that sums up the true situation of the nation in his song titled My Brother,My Enemy released in 1995 as part of his Trinity Album, in which the chorus ‘’Not every black man is my brother and not every white man is the enemy’’ has become a reflection of his many honest truths  and prophecies  as he was killed by 3 black Africans on the evening of October 18th in 2007.

As activists made their speeches and take to the street with protests,Lucky used his humanist verses and melodious emotional sound to shape the south African social and racially divided system towards a positive dimension.He may have done more than others because Songs and music are welcomed visitors to most homes and one of the easiest way to speak to people subliminally and effect a change subconsciously by raising a new awareness in people.

Lucky Dube despite knowing the power of music employed it to ensure stability and social cohesion among the races in South Africa instead of exploiting it for self aggrandizement,he devoted his over 20years musical careers searching and drawing attention to social issues in the world through his music,he sang  against child abuse, divorce, injustice of the system, challenges of migration,loss of love and more.

Lucky Dube still speak today to south Africans and the rest of the world  with his songs, and proactive  lyrics despite having left this earth over a decade ago, its time that the south African government promulgates a law that keeps every south African at home on the 18th of every October to listen to the Gospel of Lucky Dube,  a day spent listening to his works will make greater positive impact in their racially divided community and amplify the influence of his lyrics to the rest of the world.

Lucky Dube is  to be canonized, not  for being an entertainer but for the socio-cultural issues and the paradigm shift that he  consistently raised with his works, his career was for the betterment of humanity as he spoke to the heart of every man on the need to adjust their ways from each of our diverse excesses and vices, 18th of October should be a public holiday in honour of Lucky Dube.

We in All Africa Media Network will be releasing more articles on the reasons why and the need for you to join us in ensuring that Lucky Dube is immortalized in the annals of South African History, he is aproven example that Artists are essential to the transformation of societies.