Ikeoha to Ararume: you are a brother, I will continue where you stopped 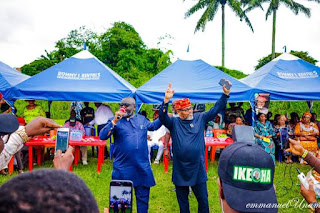 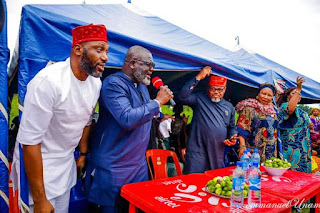 The frontline  candidate who was calm and at home during the campaign at Isiala Mbano, told the people that he has maternal relationship with them.

He informed them that his late mother was their sister, a bonafide daughter of Isiala Mbano.

Chief Okewulonu who was almost moved to tears as he recollected the loss of his  mother, who could have followed him to the campaign ground,  observed one minute  silence for her soul and the souls of the departed.

He therefore hailed  Sen. Ifeanyi Ararume, the strong man from Isiala Mbano, described  him as a brother and worthy son of Okigwe zone.

The incoming senator made it clear that Senator Ararume placed the name of the zone in Nigeria's map as a PDP senator.

He called on the people to vote for him without reservation, because according to him,  he will continue where Sen. Ararume stopped.

He told the people that since    Isiala Mbano is his maternal home,  they will have the best of the outcome of his  quality representation, if voted to power.

The PDP candidate promised to attract infrastructural development, job placement and offer effective and efficient representation as never witnessed before in Okigwe zone.

Hon. Jones onyerieri , a PDP stalwart and former member, House of Representatives, who also joined the campaign train, told the people of Isiala Mbano that the Senate is a serious place that requires  serious minded people and not PA of a politician.

He noted that Chief Emmanuel Okewulonu is eminiently qualified for the job.

Earlier, the campaign train of the would-be senator had paid a courtesy  call to the traditional rulers in the local government.

While speaking to the royal fathers at the palace of the chairman of Isiala Mbano councill of traditional rulers, HRH, Eze Joseph Mbamara, the candidate requested for royal blessing to enable him  function as a senator, God's willing.

The traditional rulers who were excited to know that his mother was from Isiala Mbano, shawered blessings on him and urged him to attract the necessary government agencies to  construct their  roads which  have become impassable.

The PDP  state party chairman, Engr. Charles Ugwu, who came with other members of PDP State Executives, told the royal fathers to take it for granted that a vote for Chief Emmanuel Okewulonu is a vote for the best.

He said that the choice of Chief Okewulonu to represent PDP was  collective and well  thought out based on his  unequal qualities to deliver.

The ward campaign party executives and ward executives of Ikeoha  campaign Council  chairmen  such as Hon. Kinsley Akubundu,  Hon. Sila Egbe,  Chief Longinus Ezirim, Prince Dandy Mbamara and others, assured that the grassroots have vowed that the Okigwe senatorial seat is for PDP. 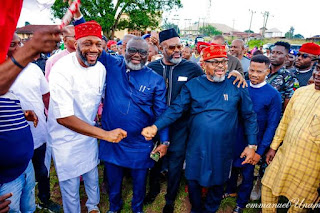 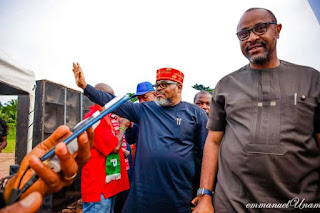