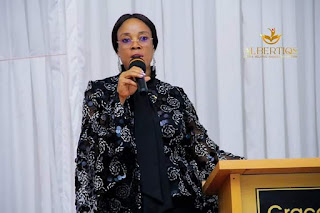 The Theme of the year's celebration is MY VOICE, OUR EQUAL FUTURE and the title is: Unraveling Her Truth, Lies She's Been Told. RT. Hon. Amb. Uju Onwudiwe, the chairperson of House Committee on Gender Development and Vulnerable Affairs joins other well-meaning women such as Dr Mrs Chinwe Okpechi, an architect and an erudite scholar, a lecturer at Federal Polytechnic Nekede.

Other respected women from various walks of life graced the occassion and Amb. Uju onwudiwe took the stage to present the keynote address centered on Changing The Narratives of The Girlchild

Breaking the barriers and changing the narrative of the girlchild is critical for the society to move forward. Let the women be empowered and let the girlchild take their competitive position in the global economy.

Here is the Address In Full

1. Potentials of Girlchild: the saying goes that “Train a man and train a family, and train a woman and train a nation” is apt. This is very evident in the society. Every developed nation of the world has systemically unleashed the potentialities of the womenfolk in the country such that the combined productivity of the entire population is rated as meteoric. The girlchild is therefore deserving of all forms of training and skills development to ensure that the full passion and potentials of the girlchild are activated. In the full glare of the world, women such as Angela Merkel, the German Chancellor, Margarette Thatcher, former PM of Great Britain, Ellen Johnson-Sirleaf, Former President of Liberia, Dr Ngozi Okonjo Iweala, Former Minister for Finance and Coordinator of Economy of Nigeria and Presently, World Trade Organisation (WTO) candidate for the post of Director General, etc., are all products of unleashed potentials of the girlchild. If these women had not been given the opportunity to showcase their potentials, the world would have lost their contributions to the development of humanity. How has our society supported the development of the girlchild or do we still rate them as nothing good other than a vessel for childbearing only?

2. Cultural Perspective: various cultural enclaves place huge barriers to the development of the girlchild. Some still conceive the thought that women’s education ends in kitchen and therefore do not consider the training, development and empowerment of the girlchild. In some cultures, women are not permitted to contribute ideas and aspirations such as political contests, career development and cultural recognition are all stalled against female gender. Such cultural barriers are inimical to the development of the society in general and disorient the implicit personality of the citizenry. Every culture, such as in the United Kingdom, USA, etc., that celebrates the gift of womanhood, revels in the realm of unhindered development. It is therefore essential to imbibe the principle of cultural development to enhance the empowerment of female gender.

The society of this present age is fast experiencing depletion of right values because home orientation is absent. Parents and guardians are called upon to take the work of grooming the girlchild most seriously as that is the bedrock of the development of the society. On formal education, the 21st century ushered in an economy termed the “Knowledge Economy”. Every person is expected to have an integral stake and to play effectively through proper education. The girlchild is a critical stakeholder and cannot be a passive partner in the economy.

4. Vulnerability of the Girlchild: The society is proving riskier by the day. Various forms of violence directed at persons and particularly the female gender is alarming. Rape is recorded to be on the increase, traditional unwholesome practices and discrimination against the female gender is rampant. In order to protect the people and particularly the female gender from escalated acts of violence pervading the society, there is a Bill for a law introduced in the Imo State House of Assembly, termed the Violence Against Persons Prohibition (VAPP) Bill, 2020. The Bill is a domestication of a federal Act, 2015 meant to inject legal framework to champion the observance of civility and sane conduct in the society.

A society is as good as the height of violence permitted without conscious effort to curb such. It becomes imperative therefore that to achieve a better society, there is the need to present a legislative instrument that will address such. A policy to combat rape and other forms of violence against the female gender has also been authored and presented for approval and implementation. As the chairperson House committee on Gender Development and Vulnerable Affairs, I am committed to driving such initiatives that will protect the dignity of womanhood and the vulnerable. My joy as a mother, legislator and champion of revived and sane humanity is to provide the right framework and legislative enactment to champion positive change of the society and the eradication of the landmines that entraps the girlchild and humanity at large.

The girlchild needs to be paid rapt attention to, in order to engender full development of her potentials. The society cannot move forward if lip-service is still being paid to the development of the girl-child. I call for abrogation of all laws that place barrier to the dignity and integrity and development of the girlchild and the womenfolk. The girlchild is not meant to play second fiddle but a full human person who can be instrumental to the transformation of the society, given the opportunity to act. Let there be a conscious effort to change the narrative of the girlchild through enabling her potentials, cultural imperative, education and reduction of vulnerability.

May God bless us all, amen.