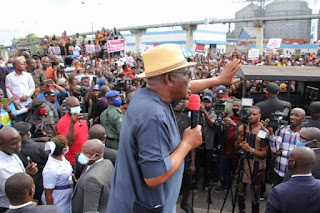 Governor Nyesome Wike of Rivers state has bowed to pressure from Nigerian youths, withdrew his directives, and joined #EndSARS protest in his state. Nigerian youths on Tuesday converged at the Government House, Port Harcourt, demanding the presence of Wike who had warned them to jettison the idea.

Speaking to the protesters during the protest, Wike said: “I never supported us to be here. I took an oath to protect the lives and property of people of the state. The blood of Rivers of people matters to me. “Rivers State has suffered in the hands of SARS. When we raised the alarm of SARS activities, they did not give attention but it has now happened in other places.

“No governor in this country can say they have challenged SARS the way we have done.

When there was so much kidnapping in this state, I raised an alarm to the federal government. “I am the only governor that has come out to start end SARS protest. No other state. We have lost so many people in this state to SARS. No state supported us. SARS has killed our people a lot,” he stated.