EXONERATE IMO YOUTHS FROM THE KILLING AND BURNING OF PRIVATE AND PUBLIC BUILDINGS IN IMO STATE- GOV. HOPE UZODIMMA 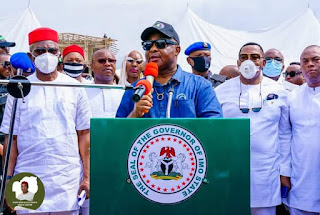 The Executive Governor of Imo State Sen. Hope Uzodimma has disassociated and exonarated Imo youths from the attacks and vandalization of both government and private infrastructures and business places in the state.

It has become imperative that while many may be condemning such acts in the state, we do not as well cast aspersions on our youths that genuinely took to the roads to protest against police brutality and the need to end Bad governance in the country.

As a youth friendly governor, Sen. Hope Uzodimma may not be far fetched from the truth owing to the acceptance of his address by the #EndSARS protesters in Owerri and his firm resolve to take up their issues up to the presidency and most especially by living up to his promises as witnessed in the recent N2B empowerment funds, all was a soothing balm on the nerves of imo youths which made the state peace while other states was been ravaged by series of unrest and vandalization.

Surprisingly, the once peaceful Imo state protest started getting infiltrated by agent provocateurs whose intentions are not in sync with the original objectives. In a bid to ruin the reputation of what has been built by the original protesters and that of the state government, Police stations, government offices and officers as well as banks and other private buildings were set ablaze by persons whose physiognomy screamed violence and gradually Imo State was becoming a haven of narcotics and other psychoactive users, hence the need for the curfew to restore normalcy in the state.

A careful observation as to the events of the unrest in the state revealed that the #EndSARS Protest in the state was hijacked by hoodlums imported into the state by the opposition, with the sole purpose of plunging the state into several activities that will form the basis of criminal and security threats and in turn call for a State of Emergency in Imo State.

Gov. Hope Uzodimma is therefore wise and at the same time proven that his priority is first about the welfare of Imolites and so are Imolites grateful to have a governor like Sen. Hope Uzodimma who knows when and how to react in issues concerning Imolites. Once again the governor has shown his proactiveness and a good knowledge of his people, that violence has never been in our DNA as imo people.

The opposition should therefore quit playing politics with the lives and future of our dear youths and help the government find long lasting solutions to the agitations of our youths by providing employment opportunities and empowerment programmes as well as funding the Small and Medium-Size Enterprises owned by youths in the state as a panacea to building a better Imo rather sabotaging the peace of the state.