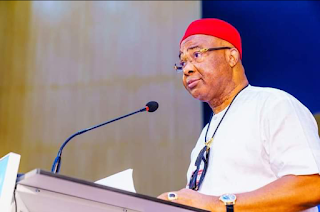 My dear good people of Imo State, I address you once more on the worrisome state of affairs in our dear state. You were all witnesses to the carnage and mayhem unleashed on the state  yesterday by a group of bloodletting despoilers claiming to be EndSARS protesters.

The callous murder of security operatives, the vicious burning of Police stations and the wanton destruction and looting of public and private concerns as well as the unwarranted harassment of innocent citizens,  which marked the sad events that occurred in our dear state on Wednesday 21st, 2020, all point to the obvious fact that hoodlums have hijacked an otherwise peaceful protest by EndSARS advocates.

The state government is, to say the least, shocked at the level of reckless violence unleashed by these merchants of unprovoked bestiality .If these agents of death and destruction ever believed in the noble cause of the EndSARS protesters, they would have been minded to admit that they cannot seek cure for brutality with even more brutality. But of course they are on a different, vicious mission.

Their actions have set the state backwards as it will take a toll on the state finances to rebuild what they have destroyed. But those they murdered in cold blood will never come back to life. These are some of the grim realities we are forced to contend with resulting from the unpatriotic brigandage of a few .

The state government sincerely sympathises with all the victims of the vicious attacks and the families of the bereaved. Surely the long arm of justice will catch up with all those behind these primitive outbursts.

I urge all peace loving Imo people to remain calm and be rest assured that we shall   do everything necessary to protect their lives and property. By now even doubting Thomases will agree with the wisdom in  the government's well informed decision to  impose a 24 hour curfew in all parts of the state.

In the circumstances, the government wants to make it absolutely clear that the 24 hour curfew announced on October 20th is still very much in force. Security agencies have been charged to enforce the curfew to the letter. Curfew means that there is no movement of persons or groups either in the day or at night till further notice. This means that, there should be no movement of both vehicles and human beings in every part of the state.

I appeal and advise all law abiding indigenes and residents to stay indoors until the curfew is called off. It is important to urge our people to comply with the curfew regime for now.

Please be warned that anyone seen outside while the curfew lasts, will be treated as one of the sponsors or perpetrators of violence in the state.

Let me  reassure the good people of Imo State that the  government will do all within its behest to protect the lives and property of our people.