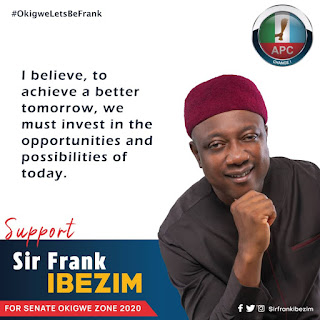 Say that Hon. Frank Ibezim is the best among his contemporaries from other parties jostling for the soul of Imo North senatorial seat and you have said the undiluted truth.

The reason is because those who have so far emerged candidates of various parties through the recent primaries came from different school of thoughts. Frank Ibezim's case will be very much akin to the biblical anointment of David among the seven sons of Jesse. Here, it is only God  who reserves the powers to reverse a heavenly decision.

This is suffice to say that the All Progressives Congress candidate has not taken a total resemblance of the biblical David who merely came to limelight soon after the prophetic declaration and anointment.

In this case, Hon. Frank Ibezim has been a critical stakeholder in the political life of Nigeria way back from 2010 where he once aspired to represent the people of Okigwe South at the Green Chamber of the National Assembly, although that dream was not actualized.

Contrary to some people's believe that the young politician suddenly became the beautiful bride probably because of his affiliation with the current Minister of State for Education, Hon. Chukwuemeka Nwajiuba, it is important to note that Chief Ibezim has been an active player in the country's political game. Worthy of note was his role to enthrone the government of Muhammadu Buhari during the President's second shot in the presidential race under the platform of Congress for Progressive Change (CPC) sometime in 2007. He was then the Director General of the Buhari Campaign Organization, Imo state chapter and had remained steadfast till 2015 when his principal eventually emerged the President of Nigeria.

It would be recalled that Chief Ibezim had in 2014-2015 served the state as the Commissioner for Agriculture and Natural Resources and at a point, appointed the Managing Director of Imo Poultry Limited where he was also credited with rapid revamping of the moribund poultry.

He has been actively involved in community development projects and has constructed several rural roads and also built a multimillion naira Bishopric Chapel of the St. Paul's Anglican Church, Ezeoke Nsu. As a man who has an overflowing love for his people, he had extended his milk of human kindness to a handful of people in his community by empowering them both in business and skills acquisition programs. The installation of street lights in his community has also endeared him more to his people.

Chief Ibezim's academic qualification does not bear any blemishes. He graduated as a student of  Industrial Chemistry in 1987 at the prestigious Imo State University.

Ibezim's untapped knowledge in the United States of America where he worked as Fleet Manager at Auto Nation, Houston Texas and as Case Manager of Youth Co-op, Miami Florida, will suffice enough to bring about the much needed change in Okigwe zone.

As a consummate individual who has premium for good governance, he will certainly do well in offering the zone a quality and people-oriented representation. He will be held by his promise to close the gap between the zone and others with respect to developmental differences.

However, it has become more expedient, at this time, that Okigwe zone makes the most informed choice of their representative in the person of Chief Frank Ibezim. Lest, the problems of the area will continue to lie unsolved.

Frankly, Okigwe zone will get it right this time if Hon. Frank Ibezim is given the opportunity to go.

Therefore, the people of Okigwe zone are advised to leverage on the October 31 bye-election to vote in a man who has exhibited rare leadership qualities and competence both in private business and public service.

Chief Frank Ibezim is the solution to Okigwe's political, economic and leadership problems.