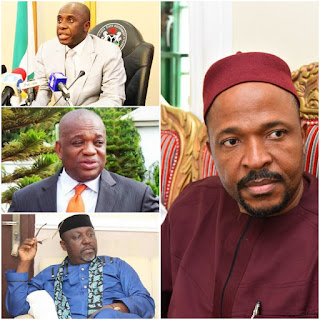 It’s barely 3 years to the next Nigerian presidential election which shall be coming up in the first quarter of 2023 as the case has been in recent times, but already the schemers are at the top of their game as analysis and agitations for the right to the presidential seat is on a new crescendo than ever before.

There has been speculations over the need for the South eastern geopolitical zone of the nation to be given a lee way to the position due to the fact that since being major actors and participators in the gruesome Nigerian Civil war that ended in 1970 which is over 50 years ago, no one from the Zone has made it to the apex leadership position in Africa’s most populous nation regardless of the fact the South easterners or Igbo’s are one of the 3 major tribes in Nigeria.

The new consciousness on the need for secession of the zone from the rest of the nation being led by secessionist groups like Movement for Actualization of Sovereign State of Biafra ( MASSOB), Indigenous People of Biafra (IPOB) and the rest hinged on an assumed marginalization of the zone, has been pivotal in drawing sympathizers and followership to the cause especially the faction being led by the vociferous Maazi Nnamdi Kanu.

The Case for Igbo Presidency

For the first time in every long while, the narrative in the Nigerian political landscape is actually changing,  even so that northern and south western Nigerian statesmen are affirming the notion that the two major political parties in the Nation should zone their presidential candidate slot to South east of Nigeria in order to make right the wrongs of the recent past and ease the possibility of an Igbo person ascending to the presidential seat come 2023.

As the unfounded conspiracy on zoning of Nigerian presidency to Igbo nears its climax and names of politicians of the Igbo extract are being bandied about for possible consideration for the apex position, some Igbo leaders are already keying into the moment and has even flagged off a silent and unofficial but seemingly campaign on social media for the power seat.

Unarguably the current ruling party in Nigeria All Progressives Congress founded on February 6th 2013 has fewer south easterners in their wings than the opposition  Peoples Democratic Party (PDP)that has been in power since the inception of Nigeria’s 4th Republic whose zoning policy has been like a magic wand that has hypnotized and memorized the people of the south east as they see it as a viable platform on which to achieve their most elusive dream since they lost the Nigerian civil war.

Now the leading names on the list of Igbo’s in APC that are being bandied about for consideration for Igbo presidency are Orji Uzoh Kalu, Chris Ngige, Rochas Okorocha, Ogbonnaya Onu is more silent on this list even the Minister of Transport Rotimi Chibuike Amaechi has recently came out to affirm his Igbo ancestry in a bid to position himself for consideration by the King makers.

Yet unlike the names in the above paragraph there is another person of immense quality who seems to have no zealots or charlatans to scream his name to the heights of the heavens but whose antecedents has rather chiseled his name on the record books of silent achievers of Igbo ancestry in the present ruling party, Barrister Chukwuemeka Nwajiuba the present Minister of Education.

Uzor Kalu at 60 is building on the hype of his present release from prison in a case that he is yet to be acquitted from, as a testimonial for his pre ordained destiny to emerge as the Nigeria’s next president hinged on the OBJ factor that everyone is in the know of.

Chief Olusegun Obasanjo suffered untold hardship in detention over an alleged complicity of his involvement in a coup d’état attempt on General Abacha, in 1995 Obasanjo was arrested and convicted of being part of a planned coup, despite protesting his innocence. While imprisoned, he became a born again Christian. He was released following Abacha's death in 1998. And he won the presidential election on 27 February 1999     and became Nigeria’s president on 29th May 1999 ushering in the 4th republic.

Orji Uzoh Kalu is not Chief Olusegun Obasanjo and they both do not share same destiny, his over a decade case with the Economic and Financial Crime Commission based on his alleged misappropriation of the common fund to the tune of 7.65 billion naira (21.1 million U.S. dollars) which  only time can tell his lot on that accusation that he is yet to untangle himself from for over 10 years will be vital in determining his fate in the race for the seat of presidency.

Rotimi Amaechi has been proactive in his efforts to overhaul the Nigerian transportation sector with new rail lines and trains from china, following the blueprint initiated by the Goodluck Ebele Jonathan led administration.

The issue is that he is not originally from any of the 5 major south eastern region states in  Nigeria as most Igbo’s are interpreting his Igbo ancestry claim as a gimmick like the addition of Azikiwe and Ebele to Goodluck Jonathan’s name  which most Igbo’s frown at as unofficial and  un-baptismal names to the former Nigerian  president coined to hoodwink them as well as ensure he garner more votes from the Igbo’s.

Another hopeful for the Igbo presidential seat in 2023 if it becomes reality is the immediate past Governor of  Imo State ,who also controversially muscled himself to the red chambers in an election alleged to be fraught with inconsistencies .

He infamously left  a dived APC in his home state over his frantic efforts to ensure his son in law replaced him as the governor, Anayo Rochas Okorocha is a very brave and daring politician who is not perturbed by daring the status quo and this his penchant for drawing controversies to himself will likely not work in his stead  come 2023.

As much as his name doesn’t not fit in the category of names mention above over his humility and lack of  hunger or rather crave for media attention is well understood, he is to be recognised more as a technocrat than a politician and has judiciously kept his hands out of the scathing fire of negative controversies with his love for transparency,  he will always stand out on this list for his calm temperament, gentle disposition and intellectual  poise of the highest order.

Sure Chukwuemeka Nwajiuba may sound foreign to any ones ears when juxtaposed with those earlier briefly elaborated on this article in the case for Igbo presidency, but outside honored degrees and borrowed certificates, he is the most intelligent being a professional in the list and the youngest as well as seemingly incorruptible compared to the huge baggage of the controversies appended to the names of his cohorts in this list.

Emerging as the Minister of Education in the present administration speaks silently of his influence and the depth of the trust that Mr. President has on his capacity to deliver, by entrusting one of the most sensitive portfolio in the ‘Next Level’ administration to him.

A nation’s strides and achievements in education is one of the measures in gauging an administrations development plan for the youth and the future leaders of the nation, so underrating him on this list will be anyone’s personal undoing as he is the one sure element of surprise in this whole Igbo presidency brouhaha.

The Imo born Minister of Education is the possible secret ace on the sleeve of Mr. President ,who will surely opt for continuity on his legacy of integrity by opting for a honest Igbo man of sound moral and intellectual attributes of high depths and velocity for his possible successor.

Roles of the under-privileged majority.

In a nation that its population is tipped towards the youthful population, it is believed that over 61% of Nigeria’s present population is  25years or under, increasing higher to over 71% of the population at 54 years and under.

This presents an optimal opportunity for the youths who complain of marginalization and being robbed of their place at the table where decisions that affects them most as the majority are being made to step up with their votes in 2023 and tip the scale to their favour.

2023 presidential election presents an ample opportunity for the Nigerian youths and young adults to harmonize their efforts  and pool their votes together for a leader who is arguably one of them, and if the presidency is perchance zoned to the south east in 2023,they should avoid repeating the mistakes of the past by opting for the best possible contender regardless of the fact that he is not a career politician.

Not being a career politician regardless of his occasional strides to contest from time to time without much success, in every way perfects the reasons why the young Minister of Education  should be given  the mantle of leadership and blessing of Mr. President to forge and lead a united Nigeria on the foundations of peace, Justice and prosperity.

Barrister Nwajiuba having grown in the northern part of Nigeria  is a full de-tribalized Nigerian, that doesn’t identify with tribal loyalty and sentiments that has warped the reasoning of most Nigerians of the older generation,  being young at heart ,there is no better time for Nigerians to anticipate for a leader of his kind than this era in which the young are seemingly taking over the helms of affairs in Nations like Canada, France in the present decade and Nigeria needs to follow suit.