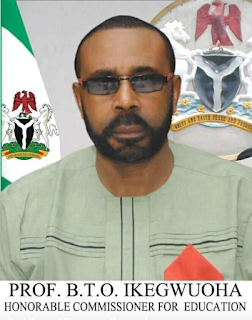 Office of the Honourable Commissioner for Education, Imo State

Please note that the Federal Ministry of Education did not mandate all the 36 states to reopen their schools at the same time. What the Federal Minster of State for Education said for which the 36 States Commissioners of Education in Nigeria, including other stakeholders in the education sector of the Nigerian economy, is that each state wouldn't reopen before the day: September 17, 2020 but could reopen after Sept. 17, 2020 based on the peculiarities of individual states.

Arising from the above and recognizing the pressure mounted by parents/ guardians and stakeholders who, if Imo State schools reopen and God forbids something happens, will be the same persons and the destructive opposition that will first shout to high heavens against the Government for whatever that may have gone wrong as a result of quick, uncoordinated and ill timed reopening of schools in Imo State.

In view of the above, Imo State Executive Council (EXCO) has mandated the Hon. Commissioner for Heath, to expedite actions and present to EXCO within one week, the result/report of Community Testing of all the 27 LGAs of Imo State so that EXCO members will be better equipped and well informed to take a decision as to when the Governor of Imo State would declare schools in Imo state reopened

The declaration has become  pertinent and expedient because the Government of Shared Prosperity would not want unsuspecting citizens to be deceived by the irresponsible and unpatriotic  opposition. The truth of the matter is that the Governor of Imo State cannot be intimidated or blackmailed into doing what is wrong for Imo State and her entire citizenry

Members of the public, be properly guided