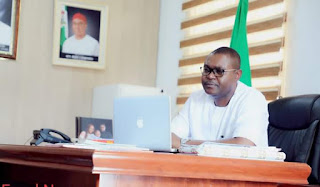 The Hon. Commissioner For Foreign/International Affairs has said that the State is witnessing Rapid reconstruction under Gov. Uzodinma.

Dr. Ihekweme made this known yesterday in his Odenigbo Government House Office when he returned from an Emergency State Executive Council Meeting presided by the Digital Governor of Imo State, His Excellency Sen. Hope Uzodinma.

He said that the creation of His Ministry was a remarkable step taken by Gov. Uzodinma as it has enabled the State to gain access to alternative means of funding Governor Uzodinma’s development strides in the state as the Government can no longer rely only on revenue coming in from the Federations’ account.

Dr. Ihekweme further stated that Gov. Uzodinma realizing that the State is in dire need of support, resorted to seeking alternative means of raising funds for the ongoing reconstruction of the state which he started on his assumption of office as the Executive Governor of Imo State.

Dr. Ihekweme assured Imo people that this administration will generate more funds from the International Community, emphasized that the federal government's monthly allocation to the state cannot in any way provide the much needed funds to solve the huge infrastructural problems facing the State.

The Commissioner For Foreign/International Affairs expressed confidence that the steps taken so far by the Digital Governor of the State has helped to restore the confidence of the masses in the government and created an enabling environment for Foreign Investors to come into the State.

He called on Imolites in the International Community to Come Home and Invest, stressing that Imo is the safest place for one to invest and reap the rewards of his capital as the government has created an enabling environment for genuine investments to thrive.

Dr. Fabian Ihekweme thanked Imo people for the unflinching support given to Governor Uzodinma’s Government and urged them to continue to support the Governor as he cannot fail the good people of Imo state who gave him their mandate to govern and reposition the state.