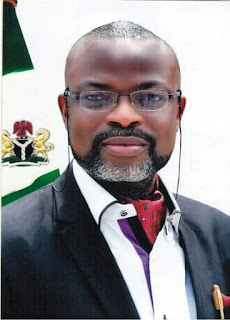 The South East Commissioner in the  North East Development Commission, High Chief (Dr) TOE Ekechi, has congratulated Governor Godwin Obaseki and his deputy on their victory in last Saturday's election.

In a statement, TOE said "I most sincerely congratulate His Excellency, Governor Godwin Obaseki and his able deputy, Comrade Philip Shaibu, on their resounding victory on last Saturday's Edo State governorship election".

He also commended. The  INEC and the security agencies.  According to him, "As a patriotic Nigerian and a law abiding citizen of this great country who in times like this should rise above partisan proclivity, I am   particularly marveled even delighted at the high level of comportment nay professionalism displayed by the Independent National Electoral Commission (INEC) and the combined team of security agencies, including the police, army,  civil defence and DSS.  Their conformity to the law, adherence to neutrality and strict obedience to maintain law and order ensured a level playing ground that ultimately allowed the voters to cast their votes without any fear of intimidation or molestation. And comprehensively, it was a desired result that was collectively achieved".

Pointedly, the nation’s principal and commander-in-chief of the armed forces of the Federal Republic of Nigeria, President Muhammadu Buhari, deserves a special commendation for resisting the temptation of meddlesomeness but instead toed to his endearing and enduring resolve of keeping to his words of not having or showing any vested or pecuniary interest in any election. In view of that, his avowed integrity blossomed beyond boundaries.

Having worked closely at the high echelon of the two previous presidential campaign directorates, I can vouch for him that he has never deliberately interfered with any election, including his own. As a matter of fact, the president has never deliberately influenced the outcome of any election.  Rather, on numerous occasions, prior to 2015, he had been the victim of election manipulations who has always advocated that votes must count in the determination of mandates.

In many ways than one, the conduct and subsequent outcome of last Saturday's election is not merely a victory for Governor Obaseki, but a victory for Edo State and her people as well as Nigeria as a country. It is equally a victory for constitutional democracy and party politics. It was an epoch that has added value to our sense of constitutionalism and electioneering. Edo 2020 has fundamentally strengthened Nigerians confidence and trust in our democratic processes, procedures and institutions.

The anticlimax of what played out in Edo last Saturday clearly demonstrates that our country's political growth and development is gradually but steadily evolving. The high point of it all is that Nigeria is on a jive to greatness. And this is as instructive as it is commendable.

Perhaps, and this is really dramatic and remarkable, Comrade Adams Oshiomhole, those who regaled us some years ago that they would bring to an end the tragic, even evil menace of dynasty of god-fatherism in Edo State, nay Nigeria politics, never, indeed, practically understood the import and full interpretation of their much echoed symbolic words. As fate would have it, those who played all of god, ghost and god-father, have become the victims of their own plot. What a dramatic irony?  What a fate? What a poetic justice?

While it would be fool hardy to believe that the race to Osadebe House is concluded without factoring, particularly in our own clime, that the election process stretches to the highest adjudicating court in the land, in this case, the Supreme Court; but at the height of it all, the central theme of it all is that, nobody is a superman, not even the now trending Governor Nyesom Wike - he would not have done anything if there was no level playing ground – a compelling reason both Governor Obaseki and the People Democratic Party (PDP) should be humble in victory. At least, we have all known now that as leaders, we must carry all stakeholders along, respect other leaders' opinions and feelings, with the hard lesson that god-fatherism and supermen have no place again in our body polity.

It's our hope that other future elections should follow suite - that, without the support of the people, no leader, no matter how strong, can survive. This is the strong indication, thereof.