BE AN EXCITEMENT UNTO YOUR CHILDREN AND NOT A TERROR AMB. OGBUAGU CHARGES FATHERS 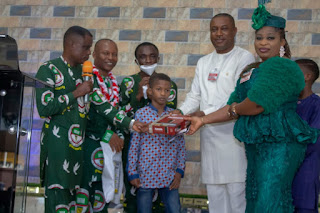 Christian Fathers have been called upon to lead a life that is beneficial to all and sundry in their homestead instead of turning into ravenous wolves. 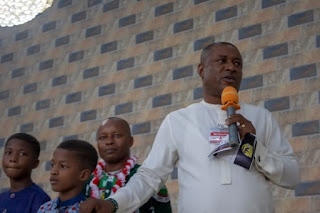 The Honourable Member Representing Ikeduru State Constituency and Majority Leader of the Imo House Of Assembly declared this over the weekend at The Assemblies Of God Church 18 Obohia Road Aba, Abia State where he was the Special Guest of Honour in this year’s Mens Day Celebration of the Church.

The lawmaker decried the situation, where children do not confide in the fathers, due to the brutish attitude they exhibit at home. He pointed out that this is one of the reasons why most children engage in cultism, drug abuse, kidnapping, armed robbery among others without the knowledge of their fathers.

The Majority Leader, describes Men’s day as a clarion call on fathers to take  stock and see where they have derailed from their fatherly responsibilities as men of the House. Amb. Ogbuagu who attended the event with his wife Mrs. Nkeiru Uche Ogbuagu and sons, called on the heads of homes, not to abandon their roles in the home under the guise of pursuing wealth and material gains. He tasked fathers to create an enabling environment for their children to interact with them.

He further called on Christian Fathers in the church to part  in politics so as to elect  individuals with the fear of God just as according to the scriptures, the people rejoice, when the righteous are in authority.

The Lawmaker, who pledged support for the church building project urged worshippers   to commit the government into the hands of God.

Highlights of the Occasion were, playlet by  the men Group as well as  musical displays by Bro. Isreal Anyanele of the Agape Love Band , an age long friend of the Lawmaker, on whose auspices he attended the event. 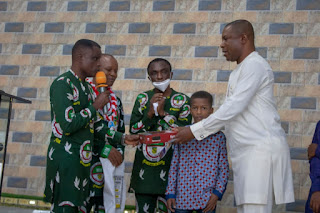