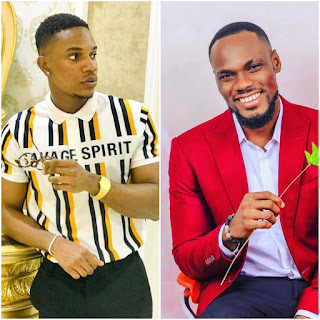 As the BB Naija Lockdown gets into its Twilight Zone, fans and supporters of the housemates who are still in the house are now more frantic than ever to ensure that their person goes all the way to the finals, which presents at least a last minute opportunity for the ultimate prize valued at 85million Naira.

One of the contestants that have stood out with his exemplary behaviour and inspiring demeanor is Prince Nelson Enwerem; a lot of celebrities and even pundits of the reality show has given him thumbs up for his strides so far, Juliet Ibrahim being the most recent in a list that includes Uti Nwachukwu, Ebube Nwagbo, Don Jazzy among others.

As Prince emerged on the list of those up for possible eviction, his kid brother an upcoming Afro pop artist that goes by the name OGVillz has dropped a tune inspired by the antecedents of his brother in the house so far, aimed at urging the fans and supporters of his brother to vote for him and ensure he survives this week’s eviction.

OGVillz the 6th and last child in the Royal House of the Enwerem in Ebii Kingdom Imo State, is a graduate of theatre arts and made the premium efforts to ensure his Big bro @princenelsonenwerem pulls through to the finals which is not far off, by spending a few days writing, recording and dropping the Royal Army Anthem on his instagram handle @itsoggram.

The eldest prince in the royal household Prince Ugo -Myke known as “Prince’s Elder Brother” has taken to the show when the younger Prince in the BBN Lockdown intensified his interest  by emotionally apologized to him over an incident that happened last year between  them.

The Elder prince has been visible of recent calling for support for his bro with a rallying call for the Royal Army soldiers to rise up and meet the situation at hand with their votes , he had an exhilarating message  accompanying his recent post introducing the OGVillz Royal Army Anthem.

All man must hear am. This week we must show them that we are not weak.
Let all your spirit be gingered ROYAL ARMY because we are not going ANYWHERE.
We are a strong force and nothing can Stop US because the Almighty God is on our side.
IT'S A BATTLE  AND WE ARE EQUAL TO THE TASK.’’
An excerpt from his invigorating social media message reads.

The Imo State born Prince in the lockdown house   who studied pure physics   at University of Calabar and emerged as Mr. Nigeria in 2018 is a maestro of many arts and emerged as an essential player in the house with his multi-talents in grooming which has amplified his humble personality and endeared him to millions of Nigerians more, rather than his nobility.

Daily , more fans of the show are being taken by the strength of his personality in the house; he’s a very focused gentleman with a spine of steel and has shown this by standing his ground, unwavering to all temptations so far to his moral stance.

Text Prince to  32052 to Vote for him.
You can download the song with the link below.
https://audiomack.com/ogvillz/song/royal-army-anthem

Follow OGvillz on instagram @itsoggram for more updates on what he is up next in his music career as we wait to see how the BBN Housemate fiasco unravel this weekend.
Celebrity ENTERTAINMENT