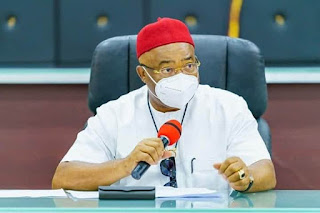 In Imo State today, it's no longer news that our amiable, unassuming and hard working governor has left no one in doubt of his determination to not only surpass the estimation of his political opponents but leave behind him legacies of sustainable infrastructural development and a prosperous new Imo.

From the inception of his administration, in spite of the obvious economic challenges occasioned by the ravaging novel coronavirus pandemic and numerous sponsored distractive and malicious media campaign against his administration, Governor Hope Uzodimma has remained consistent with his vision to reconstruct, rehabilitate and recover Imo State from its state of infrastructural decay and economic squalor.

Contrary to the expectation of naysayers and political traducers, on his laudable policy direction and implementation, Uzodimma has demonstrated the rare qualities of a true statesman and visionary leader. Beyond sustaining all inherited projects from the ousted PDP illegal administration, the APC led shared prosperity administration further endeared itself to the people with the continuation of all the probe panels and commissions of inquiry in the state, without consideration to petty political sentiments and proclivities. In our prevailing political realities, it requires extraordinary political will and selflessness for another administration to sustain the inherited policies of another administration, especially from different political parties. The truth is, if the reverse was to be the case, the story wouldn't have been the same. We know the antecedent of the opposition, because we also witnessed the despicable and shambolic reign of the immediate illegal and INEC imposed PDP administration which was characterized with gross abuse of power, administrative rascality, intimidation, harassment, and total clap down of perceived political opponents, particularly the Rochas political family.

It is on record that the ousted PDP administration commenced its road reconstruction and rehabilitation programme with about 26 roads  in late October 2019 with the flag off of Nekede/Ihiagwa road amid funfare and media razzmatazz, after almost five months spent on frivolities. Unlike the PDP INEC imposed administration, the shared prosperity government of Senator Uzodinma hit the ground running from day one in spite of the prevailing coronavirus pandemic and rainy season, with the continuation of all inherited projects.

Not satisfied with the magnitude of infrastructural decay in the state,  the governor further initiated and awarded more new road projects. While some have been completed and commissioned others are at various stages of completion. It is an incontrovertible fact that while PDP illegal administration spent seven months chasing Rochas Okorocha and his family up and down, Governor Uzodimma has committed his first seven months in office to people oriented projects, policies and programmes.

No wonder the opposition has gone beyond their childish and comical fabrication of falsehood against the present administration, to recent sponsoring of hired hoodlums and political thugs for all manner of protests in the state . This show of desperation is of all thing align to our democratic culture, and as such must be condemned by all people of good conscience.

One understands the frastration of  opposition PDP given the fact that what they couldn’t achieve within their uninspiring and uneventful seven months in office,  Uzodinma has surpassed their records within the same space of time. Uzodimma having exposed the gross incompetence of PDP wasted months in office, instead of hiding their faces in shame, have resorted to all manner of sponsored blackmail against the shared prosperity government, the latest being the mobilization of hoodlums to attack the governor's convoy under the guise of protesting ISOPADEC staff.

Not deterred, the shared prosperity government of  Uzodinma has continued to provide quality and durable infrastructure across the state to achieve an investor friendly Imo where job creation and employment will top the priority of shared prosperity in the state.