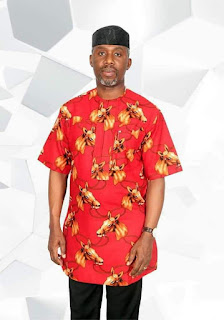 45 is such a big deal, but it could also be like every other age. Did they say a fool at 40 is a fool forever? Or, when they want to be patronizing, they would tell you that life starts at 40. There is more truth in the argot that life age is nothing but a number. So, as the drums and cymbals are brought out and the best songs are played across many parts of this country, in celebration of Ugwumba's birthday, it is not the age of the man that is being celebrated, but the life of the man, Uche Nwosu.

What really are we celebrating about this man? Is it just because he was Chief of Staff? Or because he was the most popular governorship candidate or because he is a handsome man? What does he have that other 45 year olds don't have? Why are we disturbing your ears with birthday panegyrics for this politician? Is he the only politician around?

Well, there are many politicians around and Ugwumba is not the only person that have become a Chief of Staff to a governor before. There is no position he has held that there are no other people that had held the same position in the past. The celebration is all about the man, not the office, not the purse. We are celebrating a man who feels the pulse of the people and works to put smiles on the faces of a greater number of the people.

We are celebrating a man whose passion for the empowerment of men is not political, but humane. A man who genuinely loves his fellow mankind and a man whom you can trust with anything you hold dear to your heart. A man who is strong enough to pull down a mountain, but soft enough to melt a heart of stone. A man, that man, who is truly a leader with a difference.

We are celebrating a wise man, a kind man, a very creative leader and an honest father. A loyal friend, a committed mentor and a people's mover. A man who can walk into a room and melt burning coals with his cool and straight from the heart smiles.

So, when you feel that there is too much noise across various mass media over one man's birthday, do not feel jealous, but stand aside and pick one or two lessons from the life of this forty-five year old man who has touched more lives than his age can tell.

Join the rest of all the appreciative hearts in Imo State and Nigeria to sing hearty birthday songs for that leader who has redefined leadership.