Selfless leadership has been explained as one laced with sacrifice and monumental achievements instead of shadow chasing or window dressing.

The Honourable Member Representing Ikeduru State Constituency and Majority Leader Imo House of Assembly Amb. Uche Ogbuagu  declared this at the palace of His Royal Highness Eze Dr. C.A.C. Eronini, FNCA, KDA,RMSI{Ugbele 2 Duruaku the 4th of Awo Mbieri Ancient Kingdom}, during his parley with Mbieri Traditional Institution over his plans to rebuild the Afor-Nneudo market.

The Majority Leader describes the traditional Rulers as the custodians of the culture, who should be revered in any matter pertaining to the rural communities and that informed his decision to relay to them his decision to reconstruct the market after repeated calls and delegations from Mbieri indigenes and various interest groups from the area.

Amb. Ogbuagu reeled out to the Traditional Rulers and other leaders of Mbieri that his plans to reconstruct the market was not borne out of selfish gains or aggrandizement, but to show his love and to prove he is the listening type after pleas from the area as well as his affinity to the Mbieri nation.  He pledges to use his position in the state to better the life of people at all times.

The Legislator who listed some of his achievements in Ikeduru says they were made possible because of his penchant for development, which he says is the bedrock of democracy as it betters the life of people after they must have voted in a leader.

Amb. Ogbuagu explains to the Traditional rulers that  all is set for the rebuilding and modernizing the market asking for their support to actualize the project in record time. He makes it clear that as a Lawmaker, he will not go against the constituted authority in venturing into any dicey issue in any part of the state without hearing from the owners and custodians of the culture of the people.

In his response, the President General of Mbieri Union, Chief Akuchie welcomed the August visitor and expressed joy for his magnanimity praying God to replenish his source as his quest has his support.

For their part, the Mbieri Traditional Rulers who spoke through Eze Dr. Charles Emeruem of Amaike - Mbieri, thanked the Lawmaker for deeming it fit to come to the aid of the people in reconstructing the market. They praised him for his developmental strides which he is now extending to Mbieri. He declares that, the meeting was the first of the supreme council of Mbieri Traditional Rulers after the Covid 19 restrictions were relaxed
The traditional Rulers expressed happiness and pledged to support the rare favour. They prayed God to bless Amb. Uche Ogbuagu and take him higher in good health and wisdom.

In excitement, they asked for a little time to put their home in order and possibly find an alternative space for the traders in Afor – Nneudo before the commencement of the reconstruction project. They also pledged their honest support for their great- grand son, Amb. Uche Ogbuagu.

While speaking also, the Chairman Mbieri Traditional Rulers Council Hrh, Eze Peter Opara, asks their August visitor, to hold tenaciously his love for development and explains that they are solidly behind him in his desire to adding value to peoples lives.

In his vote of thanks,  Chief Goddy Ibeawuchi appreciated the Traditional Rulers for the peaceful atmosphere granted them and that Amb. Uche Ogbuagu is development personified, who has done a lot in Ikeduru in terms of landmark projects. He called on them to ensure that this gift from God does not elude them, while he wishes them well in their deliberations.

Amb. Ogbuagu was accompanied to the meeting by Chief Goddy Ibeawuchi, Mr. Chris Egesimba among his personal aides. 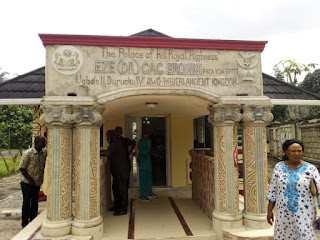