OZURIGBO: A MAN SO EAGER TO TAKE HIS PEOPLE FORWARD 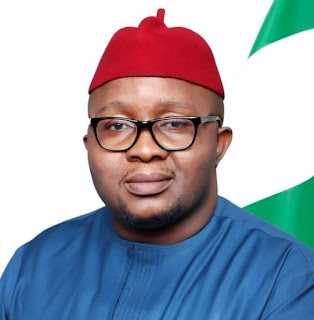 Democracy is all about good governance. The political history of the world has revealed to us that many nations attained sound democracy and good governance only after they endured internal struggles and turmoil. They emerged from political abyss to the glory of political supremacy among other things, agreeing to disagree with one another on principles, acknowledging and appreciatiing their inherent differences and resolving to respect one another's ways of thinking and approach to matters.

This is the exact premise on which one can situate the political sojourn of Rt Hon. Ugonna Ozurigbo, the mien socio-political emancipator holding sway for the people of Nwangele, Nkwere, Isu and Njaba federal constituency in the house of representatives. However, in some unfortunate cases, ignorance, lack of foresight and disregard to  development reports warranted incivility and undue criticisms.  Whatever happens in the case of the federal lawmaker, therefore, is an echo of what happened elsewhere around the globe.  Giving his sincerity of purpose and good intentions for the people of his constituency,  we are confident that the man also known as OZB by a  large segment of the society will convert the misdemeanour of our adversaries to our ultimate advantage.  He is solidly committed to improving the lives of our people through the pursuit of carefully articulated policies and programmes.

In the present political dispensation, OZB, without flattery or grandstanding, is associating himself with peace and love. He has manifested decorum, respect and appreciation for the thought of others. He is known to respect the rule of law. Hence, his position as the house committee chairman on justice. Much as he may nurture a sense of foreberance over the failed campaign  of calumny against him by those who are either ignorant of their errors or have chosen to be a clog in the wheel of progress, it is pertinent to remind or inform the public that you can't mention the names of the first class greatest employers of labour in imo state, south east and beyond without  finding a space to insert the name of OZB.

An astute business  man even before joining active politics, financial manager by training, one of the best and brightest in his class, he has 415 direct staff and about 525 auxiliary staff under his pay roll. For the records, his ventures including OZB communications, Kelvic suites, peace hotels and Kelvic farm is serving as a veritable ground of employment for many graduates and non-graduates alike.
As a licenced driver of the masses, OZB is providing good and examplary leadership, by living modest and humble lifestyle in his official engagement and personal conduct. He is aware that as a public servant, the eyes of the people are cast on him to deliver responsibilities required of him credibly. Justifiably, he is working very hard to perform above board, and ensure the prudent management of our scarce resources.

For the few discontented individuals and groups, within and outside the largest federal constituency in Nigeria that are bent on making the leadership of OZB look utterly unfair, i have a message for you: Any rain that beats up an eagle ends up washing its body and making it glow.