Imo State College of Nursing and Midwifery Cries Out Over Maltreatment, Unjust and Arbitrary Deductions of Salaries 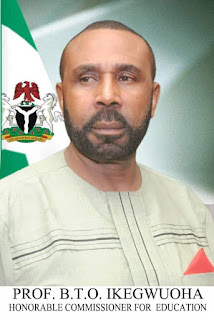 The Provost of Imo State College of Nursing and Midwifery has been accused of  Maltreatment, Unjust and Arbitrary Deductions of Salaries

According to various SOS and  petititions from well meaning Nigerians, staff and students of Imo State College of Nursing and Midwifery.

Good morning sir, this is a final year student of Imo State College of Nursing(may set)

This is to inform you that, their is more fear on us and on our SUG President, as their is fear and pressure following the current situation in school

Sir we call to your attention for maximum security for conducive environment, in our final professional Nursing Exam on the 25th of August (tomorrow). As her negative plans are unknown.

Sir please we forgot to inform you that we paid 20 thousand naira cash for nursing indexing we were told to do that.

Earlier this January result was out and we failed paper 1, she told us to come and live inside the school premises,while it wasnt so before,she told us to pay everything in full like other students for the whole yr,we spent 2 months in school February and march before we left for the pandemic,we paid 30,000 for hostel,college levy 19,500, feeding fee12,000,pre- council fee 20,000 which we are not supposed to pay,even this paper 1 weeks re writing we paid 30,500, for just paper 1, people DAT have not written before,they paid 50,500,for both,paper 1,2 and practical
Sir many things re happening that school,parents re dieing just pay for fees in that school
she told us to pay for march feeding fee which we didn't even stay for, nd all of us have paid,both decontamination fee 5,000, then u buy deltol  bigsest size of 3,500, big size jik 900 detergent biggest size 700 or u give them 500

SAVE A VIBRANT STUDENT..

With due respect sir,Our lives are in danger as I type this message to you.

Ever since your visit to the school, Our provost has been on the move to squarely deal with..students or any staff that has contributed in reporting the ill treatments received by her.

We ran to you because you direct the affairs of Education System in our State.
Sir Pls, this call is more urgent than the previous one.

The provost has made claims to destroy whosoever that has a hand of reporting her mischievous deeds.Her cousin is not relenting either.
They have plans of disrupting our exams which will start on Tuesday :25th and run through 28th.
Sir please we beg you call her to order.

A CASE OF UNJUST & ARBITRARY DEDUCTIONS OF SALARIES

Good morning sire.
I am a lecturer in IMO state college of Nursing & Midwifery, Orlu.
I have to come to this platform to express my gratitude to you for showing up in our school last week Thursday 20th My, 2020  to witness first hand the wickedness,  highhandedness & arbitrary extortion going on in ICONM.
I write with a heavy heart and a great sense of marginalization as my salary has now become marasmic since the return of the provost, Princess Ngozi Duru.
In a case of possible vendetta against the 8 nurse educators employed by the former provost, Rev Sr Grace Agu in January, 2018. The current provost concocted a salary structure where she arrived at 97,805 as against the 116,942  we were paid by the previous administration of the school. This is a reduction by almost #20,000 and it has really affected my pocket & those of my colleagues financially.
This illegal deductions in salary has been ongoing since July, 2019 till date while her brother's (Duru Obianuju) salary and those of her cronies were increase without due process and in a way to spite others. All these are verifiable facts.
Please sire i beg you to use your good office to call the bursar, accountant and provost to order in other to restore the previous amount earned using the right CONHESS salary structure for nurse educators.

Thanks for the opportunity sire as i look forward to a solution to the injustice melted out on some of us.

Arise Africa gathers that the above is  happening at the Imo State College of Nursing and Midwifery, Okporo, Orlu.

The students are living in fear of intimidation, blackmail, lesbianism, etc by the Provost, Ms. Ngozi Duru.

The above are vivid representation of what the students are going through in the hands of Ms. Ngozi Duru.  The complaints are not only coming from the students, some of them are pre-nursing students who have been charged legs and arms, but are coming from the following Very Important  Persons from Orlu zone -they are:

3.  Hon. Member representing Orlu State Constituency in the Imo State House of Assembly and many other concerned citizens of Imo State.