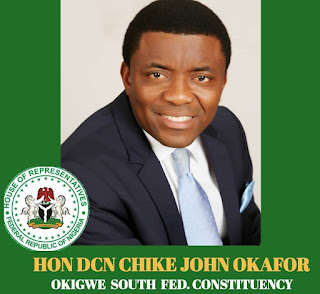 The Exceptional and Astute lawmaker representing Ehime Mbano/Ihitte Uboma/Obowo  federal constituency at the green chamber of the National Assembly, Hon.Dcn John Okafor has been conferred with most proactive lawmaker award of the year 2020 by Arise Africa Magazine.

The enviable award which the exceptional lawmaker has bagged for a record 4th time is said to be in recognition of his outstanding performance at the green chamber and in  appreciation of the lawmaker's sterling performances in the Assembly, contributions to youth development across Africa, provision of jobs to unemployed graduates within his immediate constituent over the years.

Hon Dcn Okafor is a ranking member of the House of Representatives and has numerous bills and motion to his credit. Most of them are centered on health, Infrastructures, human capital development among his people, most especially among the youths.


His love for human capital development cannot be over emphasized. No wonder,
he established one of the best school in the Southeast even before going to the Green Chambers.

He has distinguished himself among his colleagues through his kind gestures and commitment towards bettering the lives of his people. He has continued to use his position in attracting quality projects across his Constituency

He had his primary & secondary education in Imo State and graduated in 1998 with a Bsc in Economics from the Imo State University Owerri. He joined the banking sub-sector in 1999 where he spent 12 years and rose to the position of senior Manager with Zenith Bank Plc from where he was appointed Commissioner for Finance in Imo State in 2011 as a result of his doggedness, hardwork, expertise and managerial abilities

He is a recipient of numerous awards including the Paul Harris Fellow Award (PHF) of Rotary International. A Philanthropist of repute. Deacon Chike John Okafor is happily married to Deaconess Akudo Okafor & they are blessed with 3 Kids
Profile