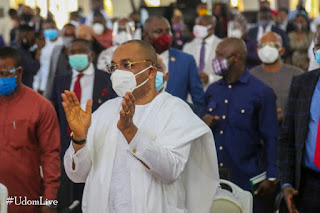 These firm words from Jerry Dorsman that "When you see the world through serene eyes, you generate peace wherever you go", can perfectly describe what is happening in Akwa Ibom State. Peace has come to stay because a man who knows how to generate peace from the original source (God) is at the helms of affairs.

There is absolute tranquility in the land. There's focused and purposeful progress in the state. People can now sleep with their two eyes closed, and this peace transcends to other strata of government, including the traditional institution.

The reason for the peace that everyone is enjoying is as a result of Gov. Emmanuel's Unique leadership style which is God-driven. He has made God to be the first in his life and the resultant effect is the overall peace in every facet of government in the state. No wonder he often refers to the Holy Bible as his number one book of leadership, which depicts the source of his inspiration.

When he assumed leadership in 2015, he didn't meet a crisis-free state, but today crisis has been reduced to its minimum, war quashed and rebellion suppressed. This is so because a man who is an embodiment of peace has chosen to generate that peace to all and sundry.

Today, one can boldly say that the People's Democratic Party (PDP) is peaceful. The recent peaceful transition of power to another EXCO is a testimony that peace has come to stay.

The party has been able to conduct its affairs peacefully, zoning formula respected, with peaceful conduct of congresses and party primaries.

During the 2019 elections, crises were visible in many states of the federation as a result of the conduct of party primaries which led to several litigations that even stopped some parties from filing candidates for the election. But in Akwa Ibom, such is unheard of because the leader of the party in the state is a carrier of peace.

This excellent leadership styl of inclusiveness made the National Chairman of the People's Democratic Party, Uche Secondus to pour glowing tribute on the governor, and commended his style of leadership and the spirit of unity that has swept through all aspects of life in the state.

The recent appointment of Sen. Udoma Udo Udoma, a member of the APC, as Pro-Chancellor of Akwa Ibom State University (AKSU) is a testament of his peaceful and unbiased leadership style. It's rare, especially in Africa for such sensitive office to be given to a member of the opposition party. This goes a long way to show that Gov. Emmanuel is unsentimental, a symbolism of excellent leadership.

Before now, the traditional institution was one leadership cadre that was known for war and tension. To choose a village head, clan head or Paramount ruler was always a tug of war. But today, the peace flowing from the leadership belly of the governor has touched the traditional stool, and peace is circulated everywhere just like electricity from the national grid.

However, the generation of peace throughout the state is equally made possible through the quality of leaders that Gov. Emmanuel has appointed into his administration. He has carefully positioned competent leaders to man different positions, an action that was hitherto influenced by greed and selfish desire to reward political support with appointment, even when they don't have what it takes to function in such office.

His appointees are basically people with proven integrity, creativity,  intimidating pedigrees and strong desire to leave a lasting mark on the sand of time.

No wonder the Bible recorded that when the righteous is on the throne, the people rejoice. The joy we are experiencing today is as a result of the peaceful coexistence among leaders in the state, and you already know the principle: It flows from the head to the skirt. Such is a flourishing leadership style and it is marvelous in our eyes.