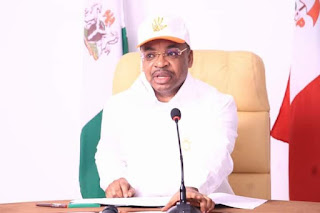 ...WARNS ITA ENANG, OTHERS AGAINST INCITING COMMENTS AND VIOLENCE

Governor Udom Emmanuel has dismissed the current report by the National Bureau of Statistics NBS, which listed Akwa Ibom state as second highest in unemployment rate to ignorance.

Mr. Emmanuel who made the remark on Sunday while fielding questions from the citizens during his routine interactive media session, questioned how the NBS arrived at its rating when people are being employed in different sectors of the economy including Agriculture and Aviation and even in private businesses.

He said it was even more surprising that the NBS rated Imo as the state with the highest unemployment rate, and wondered how that could be when the state had started entrepreneurial development even when people like him were not born.

He challenged the NBS to come face to face with him and explain the way they came about the data and arrived at their conclusion, stressing that he may be forced to use the state government statisticians to prove them wrong.

"But our own statistics is for planning and not for political reasons. Akwa Ibomites should ignore that report. As at today, we have launched over 18 new industries in the State and if you check very in every local government you go to today in Akwa Ibom State is a construction site.

“Those casual workers earn a minimum of 4,000,00 naira a day and they work six days a week, you multiply that by four weeks in a month.

"Even in our medical services, I inherited over one hundred doctors and over the past four years we have increased it to more than four hundred doctors, is that not employment?

“Do you know how many direct and indirect workers we have in Ibom Air? We are even employing people from other states. Let me tell you, in a period like this the fastest way to stimulate the economy and promote sustainability is an investment in infrastructure.

“I am glad to announce to you that our toilet paper factory we started during the COVid-19 lockdown has been completed. I am going to declare it open during our 33rd-anniversary celebration.

"We have also re-worked and improved the plastic factory in terms of quality and capacity. Also, find out the people being employed in the hospitality businesses across the state.

He said some of the hospitality concerns employed as much as 250 personnel and also added that some new industries, like the vehicle assembling and manufacturing factory in the state, are making progress.

"What then do they call employment? I want to be corrected. I know some of these things can be attributed to ignorance.

"How can you talk about statistics in Nigeria when you don’t even know the population of the states. I am ready for an open debate. Let them come and show me the statistics they computed”

"I am not saying we are there yet in terms of employment, but we are better off than what we met on ground. It is wrong to say that we are worse off. No we are not."

He used the opportunity to caution the Senior Special Assistant to the President on Niger Delta Affairs, Senator Ita Enang against making inciteful remarks against his government.

He advised Enang to instead seek ways to attract federal presence and even personal investments to support the economy of the state, saying, “Someone like Ita Enang is busy insulting the governor but cannot even attract the federal government to the Calabar-Itu road that passes across his village. He has not built a single kilometer of road. If he claims to be at the center, he should be able to use that position to attract development, and not seeking to destroy our state.

" When he talks about education, how many schools have the Federal government given him money to renovate in the state? I am not against criticism, but be constructive in your criticism and do not create undue tension in the state.

"We may use him as example to others if he keeps on this way. Use your connection with the center to attract goodwill to the state”

"In the last 15 years, no one can see a law chambers he as a lawyer has opened to employ a single staff, he has not opened a kiosk anywhere or even a tailoring shop to engage one person, but runs his mouth on the internet every day, insulting the Governor.

"If Ita Enang wants to contest as Governor, he should go and pick a form and contest and stop inciting our youths to violence", he added.

The Governor for the umpteenth time assured Akwa Ibom people that he will not impose a successor on them, and appealed to them to ensure that no cultist was permitted to take over the state as his successor.

He cautioned the people that if they desired the peace he has worked so hard to maintain in the state, they must carefully avoid voting a cultist into office as the next governor of the state.

“For this peace to continue to reign and for Christ to have control, then you must not vote a cultist to succeed me as Governor. I am not interested in third term through a surrogate only thing you can help do is to ensure that no cultist is allowed to emerge Governor of the state.

“The only way to ensure lasting in state peace is to further make a way to eradicate cultism. You have to embrace peace. Some cult groups are clashing in some parts of the state and we will stop at nothing to ensure we crush them.
“it is not our intention to deploy soldiers to volatile areas, but they are forcing us to do so. please let parents talk to their children, they gain nothing from cultism. it is time to go the right way” the governor said.

The Governor also warned youths against taking the laws into their hands, and advised that negotiations remain the best approach towards airing grievances.

Youths of Mkpat Enin and Eastern Obolo should be warned that we would no longer tolerate any situation where they take to the streets to block economic activities.

Mr Emmanuel said that he instructed the security agents not to take any action against them but warned that henceforth, any such action in any part of the state will be fully resisted and culprits arrested and made to face the law.