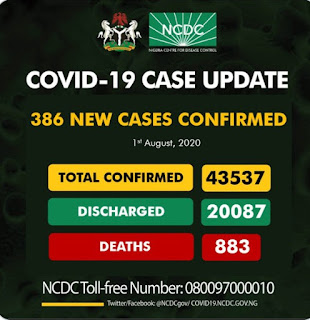 386 more cases of the novel coronavirus has been recorded bringing its total infections to 43, 537

According to a tweet by  the Nigeria Centre for Disease Control (NCDC) noted that four more persons have died from the virus as recovery numbers hit 20,087. 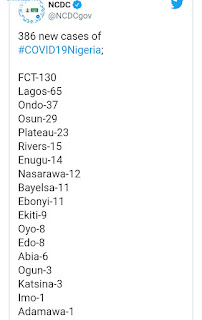 
Covid-19 Update Around The Globe:
The novel coronavirus has killed at least 680,014 people since the outbreak emerged in China last December, according to a tally from official sources compiled by AFP at 1100 GMT on Saturday.

The tallies, using data collected by AFP from national authorities and information from the World Health Organization (WHO), probably reflect only a fraction of the actual number of infections.

Many countries are testing only symptomatic or the most serious cases.

On Friday, 6,469 new deaths and 286,453 new cases were recorded worldwide. Based on the latest reports, the countries with the newest deaths were the United States with 1,442 new deaths, followed by Brazil with 1,212, and India with 764.

The country with the highest number of deaths compared to its population is Belgium with 85 fatalities per 100,000 inhabitants, followed by the United Kingdom with 68, Andorra with 67, Spain 61, Peru 58, and Italy 58.
Coronavirus Covid-19 Update NEWS Nigeria