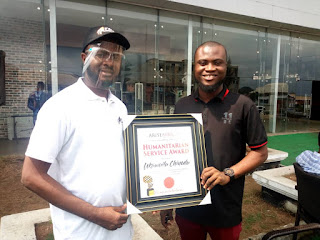 The founder of UKAWUILU CHINEDU HELPING HANDS FOUNDATION(UCHHF), Comrade Chinedu Ukawuilu has bagged a HUMANITARIAN SERVICE AWARD from ARISE AFRICA MAGAZINE for his humanitarian service and gestures to the people and the less privilege.


The young Humanitarian philanthropist has been describe as a heavyweight following his quest in ensuring he contribute immensely to human development.

The CEO Face of Arise Africa and Chairman Online Media Practitioners Association of Nigeria Imo State Chapter ,Mr Ikechukwu Anyanwu declared this when he led other members of his team to present the HUMANITARIAN SERVICE AWARD to Comrade  Ukawuilu chinedu

Mr. Anyanwu commended the UCHHF founder for  being a role model to many in the society especially the youths. Asking him not to relent in adding value to the society through his humanitarian gestures and foundation.

According to him, Comr.Ukawuilu chinedu as a young vibrant man is building a reputation that will make him stood out among his contemporaries. In his words, Mr. Anyanwu noted that in conjunction with his team, they have painstakingly examined and investigated his Humanitarian Service and his philanthropist gesture and where marvelled to the level of services he has rendered across Imo State,and beyond which stood him tall among other to be recognized and honoured with the prestigious award. Therefore, a young rising Philanthropist and Humanitarian deserve to be encouraged as his doggedness on his mantra of let love leads" he express not only in words but in his numerous actions

He called on him to keep on adding his quota in human development as he is now a role model in whom others look up to emulate his selfless humanitarian service.

Responding in acceptance of the award bestowed on him, Comr. Ukawuilu Chinedu thanked the management of Face of Arise Africa for the award and declares that all he has been doing is what gives him joy and he feel fulfilled that the little things he do at of nothing makes people happy and is been appreciated. According to Comr. Ukawuilu he is poised to help people as he sees it as part of doing the work of our father in heaven by extending his helping hands to the needy. He encouraged the Face of Arise Africa to continue doing good without fear or favour. In his words, Comr. Ukawuilu promise to do more as what his foundation has done so far is just a starting point of what the have in stock for the work of God and humanity.

Comr, Ukawuilu chinedu is an Obowo born young Humanitarian and Philanthropist. A graduate from Imo State University.He is the founder of UKAWUILU CHINEDU HELPING HAND FOUNDATION and IMO STRONG MIND DECIDE, a strong Political group in Imo State. Currently, Comrade  Chinedu Ukawuilu is the Special Assistant on Media and Publicity to the Special Adviser to Imo State Governor on Science and Technology.

He further advise the Face of Arise Africa to continue with their goals of the organization and pledges to support them when he is called upon.
ARISE AFRIKA MAGAZINE NEWS