Award Winning Song: "Hosanna In the Highest" By Gkinicks 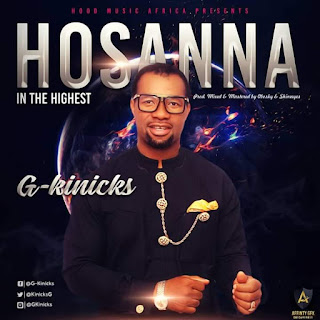 Listen to the Award Winning Songs by Gkinicks and be blessed

His gospel music gets inspiration from prayer, the word of God and challenges/testimonies in his life. He also has a record of teaching music to youth. After he lost his father in 2010, friends who came for condolence visit could not console him as he found comfort in Music. Only then he realized and concluded that music has the capacity to heal a broken heart. Gkinicks then decided to use his music to inspire and heal people who are heart broken. ”Hosanna in the highest” is the hit track on his debut album titled “Promoting Jesus “. Later 2019 he futured a new hit gospel song called “ChinazaEkpere” with Grace Eze and Chuks James. Other publications are “Jesus you are the one I see”.

Gkinicks was born into a family of nine. His birth name is George Uzo. He was born in Abia state of Nigeria. He started following his father to church at the age of eight and some of his own friends were in church choir. Gkinicks became very interested towards church choir and music generally. In his teenage years, he became a born-again Christian. Only later Gkinicks finally found courage to join church choir in Finland.


Gkinicks Fashion Hub
The name of Gkinicks was born already in 90’s when a young business man wanted to have his own label in clothing market. Since then he has been carrying the name Gkinicks even though he started doing other things. In 2016 when Gkinicks started more actively writing Christian songs he was reminded of the name Gkinicks he started his life with. This is a good name to promote Jesus which is the main reason why Gkinicks is here.

When Gkinicks joined church in Finland 2004 he began to attend weekly activities. From there he grew to became an elder and a choir leader. During the last 15 years he has been going many different churches in Finland and helping choirs to play and perform. He has the gift from God to empower others to learn music and worship God. Over these years he has learned also to play many instruments and to sing.

He is also a prayer warrior in FICA (Finland International Christian Association) in Helsinki were they regularly meet once a month to pray for Christians in Finland. Prayer is his lifestyle.

Gkinicks has been very active in church choirs since 2004. He has been playing drums, saxophone, basso, trumpet and keyboard in different choirs and resent years he started training a youth choir.

Gkinicks created the songs in his first album “Promoting Jesus” during the years 2017-2018. He was inspired about the troubles he was facing during his father’s death. Music became a healing power in his life.

3.  He Has The Following Songs To His Credit: