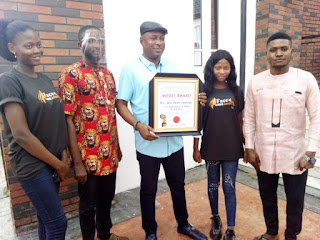 The Honourable Member Representing Ikeduru State Constituency Amb. Uche Ogbuagu has been described as an enigma per excellence in the service of God and humanity.

The CEO Face of Arise Africa and Chairman Online Media Practitioners Association of Nigeria Imo State Chapter , Mr Ikechukwu Anyanwu declares this when he  led other members of the body to present the Exceptional Lawmakers of the year Award to Amb. Uche Ogbuagu.

Mr. Anyanwu praised the Legislator for being a role model to many in the society especially the Youths. Asking him not to relent in adding value to the society.

He says that as a Legislator, Amb. Ogbuagu has achieved in one year what most  elected officials have not done in many years.
He called on him to keep on adding his quota to the younger generation.

For his part, Amb. Ogbuagu thanked them for the award and declares that all he has been doing is to uplift the standard of living of the people without asking for anything in return.

The Lawmaker assures that he remains focussed in his duties and thanks his colleagues for the successes the legislative house has recorded so far.

As a Legislator, he pledges to continue making bills that will have a direct impact on the people.

He urges them  to deviate from any act capable of derailing the goals of the organization and pledges to support them in any way he could. He calls on them to always support the Governor Hope Uzodinma led administration. 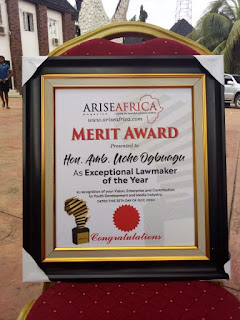