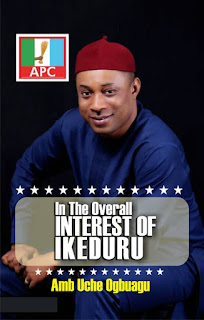 Today is International Youth Day.
A day which focuses on the growing and teens, including their place in society. It’s not just to protect them, but to include them in the development of communities around the world, whether they are rich or poor.

The International Youth Day which is held each year on the 12th of August and is an initiative that celebrates the qualities of young people and that recognises the challenges that today’s youth can face.

This event that  began in 2000 and was organised by the United Nations to celebrate the contribution that young people make in education, employment, conflict resolution and social justice to name a few. The theme of this year’s Youth Day 2020, *Youth Engagement for Global Action*” seeks to highlight the ways in which the engagement of young.

As the theme for this year implies, all hands should be on deck to give our Youths a sense of belonging. In Ikeduru as a state constituency,
Amb. Ogbuagu’s representation has ushered in a new lease of life for the Youths in line with the theme for this year’s event. After his inauguration on June 13, 2019 as a Lawmaker Representing the good people of Ikeduru.

Amb. Uche Ogbuagu has continued to add his bit to the development of our youth by the various schemes, programmes and opportunities. This is in his belief that our Youths and that if they are harnessed appropriately, would definitely be the real leaders of tomorrow.


Amb. Ogbuagu, as a United Nations Ambassador of Peace, understands that the youth of Ikeduru, Imo, the entire South East and the nation at large should be channeled towards positivism. He also aims to promote ways to engage them in becoming more actively involved in making positive contributions to their communities. Towards achieving the global action for the Youth, the Legislator as a believer in the ability of Youths has appointed them into various sensitive positions of authority because he believes in their ability as well as has faith in them that as leaders of tomorrow, they will not let the body polity down.

The Lawmaker praises the youths of Ikeduru and the state in general, who stood firm to prevent bloodshed during the last general elections. He is also calling on leaders at all levels of government, Governmental and non governmental organizations to engage in those activites that will give our Youth a sense of belonging.

This year’s event according to the Amb.Ogbuagu is being marked with mixed feelings because of the global pandemic Covid 19. He is urging the Youths not to lose focus but to adhere to all the safety protocols as established by the relevant health bodies in keeping our environment safe. God willing we shall succeed together.

On this auspicious occasion of the 2020 International Youth Day, he advises the Youth to steer clear of corrupt practices, engaging in crimes like cultism, kidnapping, rape, drug abuse, armed robbery including those vices that will divert their God given talents into negativity.

Amb. Ogbuagu has faith that our Youth will definitely turn a new leaf and avoid all forms of evil. He praise all those youth, who have made their marks at the various levels and urges those yet to do so to adjust as we all march forward to a better future.

Ikeduru shall continue to remain Alive! Mbaike will rise again.