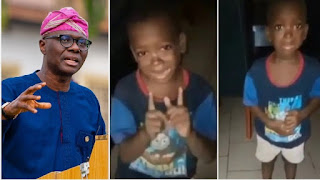 The Executive Governor of Lagos state, Babajide Sanwo-Olu,  has asked to meet the boy in the viral video imploring his mom to calm down - Sanwo-Olu said the video struck an emotional chord in him as he was moved by the boy's plea of one more last chance - The governor, therefore, appealed to Lagosians to be safe as he asked them to calm down and celebrate Sallah by adhering to safety measures . 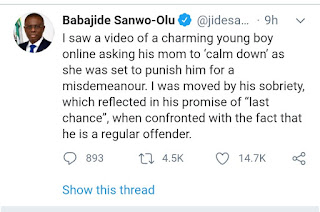 The governor of Lagos, Babajide Sanwo-Olu, on Wednesday, July 29, reacted to the viral video of a young boy telling his mom to calm down as he was about to be punished. Sanwo-Olu said he was "moved by the boy's sobriety" as the boy begged for one more chance as a "regular offender". He said that the video showed that parents put in a lot of work to raise their kids as he added that he hoped that the mother really "calmed down" as the boy asked. The governor used the opportunity to tell Lagosians to calm down during this festive period as they mark the 2020 Sallah celebration with the consciousness of protecting themselves against Covid-19. He also said he would like to meet the boy.

According to our sources, this is not the first time a viral video has pushed young Nigerians into the limelight. Remember the young 17-year-old girl, a female mechanic repairing forklift, who got an offer for scholarship from the government hours after her short video became popular on the internet. The offer was made through the minister of youth and sport, Sunday Dare, on Monday, July 27, as he asked for the full details of the young girl. Weeks before that happy development, another young Nigerian, Anthony Mmesoma Madu, got a scholarship after his dancing video broke the internet at over 14 million views. Anthony is one of the 24 students at the Leap of Dance Academy in Lagos state, an academy founded in 2017. On Wednesday, June 24, Fade said she would sponsor the boy’s education until he finishes university. The Nigerian, days later, shared a snapshot of the boy and another that she pledged to sponsor in school. She said that their smiles give her great joy as she prayed that they will fulfill their life’s dream.

Anthony's mother, Ifeoma, said the boy never told her he was into ballet, that she noticed it herself with the way he stretches his body parts like legs. “He never told me but I noticed it in him when he will be stretching his legs, his hands. I said ‘what of nonsense is this’? Whenever he is dancing, I feel happy, I have joy watching him dancing," she said. The mother also said that she cannot believe this is actually her son, referring to the new fame he is in. The woman advised parents of the need to discover their children’s talents and give them the necessary support. 4-yr-old boxer: I want to become a world champion
Calm Down NEWS