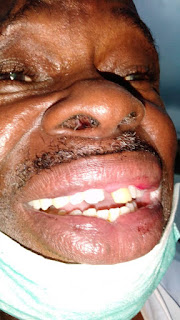 It was indeed a worst day for a repute Imo based Journalist, Mr.Iyke-Jacobs Nwosu (Okwuruoha) of Eastern Lead Express Newspaper was who beaten up, humiliated and battered on Tuesday,  June 18th 2020.


At the Imo State House of Assembly,  IMHA,  complex annex Owerri,the member for representing Oguta State Constituency,Hon.Barr.Frank Ogbuoma, and some of his political aides was obviously captured by some other Journalists (House of Assembly News Correspondents) when some thugs numbering over five (5) persons including the lawmaker dragged down a the journalist over a newspaper report allegedly made on his tabloid.

The battering of the State Assembly Correspondent by the Oguta lawmaker was originated from the outcome of a news report made against him as he (Ogbuoma) claimed.

It was gathered that Okwuruoha's newspaper (Eastern Lead Express) wrote that the IMHA member representing Ikeduru, Hon.Amb.Uche Ogbuagu, in a oral quarrelling tagged and described Hon.Ogbuoma as a "luke-warm- lawmaker".

Hon.Frank, who was very furious said when he confronted Hon.Ogbuagu, he denied that he didn't call Hon.Ogbuoma a luke-warm-lawmaker and exonerated  himself from the newspaper report.

But findings further has it the Ogbuoma had earlier filed a court suit against the Ikeduru lawmaker, Ogbuagu , demanding  for rebuttal of the said publication in some National Newspaper Dailies or pay to Hon.Ogbuma the sum of #200 million for image laundering, as accused by Hon.Frank.

Shortly after battering Ike Nwosu by the lawmaker and his aides, Hon.Ogbuoma, told some journalists that he is not afraid of the media or any body who may come to make case for the bartered newsman who was immediately rushed the hospital for urgent treatment.

According to Hon.Frank, "Listen all of you, I am not quit lawmaker, I am ready to fight dirty anytime, anywhere and anyday. Are you seeing some Federal lawmakers and Senators fighting with chairs? So i am not a gentle man. You journalists must be very careful in all your reportages.

" No journalist have a single right to defame or assassinate any person's character just because you are having pens and papers. I am out to deal with anybody or any press man who have chosen to run my political aspirations down", he maintained.

"As journalists, all you come here to do is to run down lawmakers in the name of journalism. You have continued to cause more troubles for us here as colleagues in the House. That nonsense must stop. I will not tolerate that wicked styles of journalism you are practising in Imo State",  he lamented.

" I am a practising lawmaker and also lawyer still standing, no journalist can pull me down. You as journalists should go back to schools and learn what is called investigative and balanced journalism",  Hon.Ogbuoma warned.

Meanwhile, a group of young Imolites under the platform of ''Make Imo Better, MIB", ably led by their State Coordinator, Hon.Comr.Christian Anyagwa,who spoke to journalists at the Imo Govt.House Owerri, strictly condemned the battering of Imo based journalist, and expressively blamed the Oguta State Lawmaker, Hon.Ogbuoma and his aides who were alleged to be political thugs for beating the journalist.

The MIB leader, Hon.Christian Anyagwa, who condemned the acts, frowned at the heights of humiliation and intimidation of men of the forth estate of the realm by some political office holders in Imo State, and insisted that such ugly and unlawful acts must be put to a stop.

The leader of MIB therefore stated that the lawmaker should either call for the debunking of the news story or go to court to seek redress instead of taken laws into his hands.

Comr.Anyagwa however warned against further brutalization of journalists by any body, but called for peace, cordial relationship and synergy amongst newsmen and lawmen in Imo State.

The MIB boss in Imo State further charged the lawmaker to sue for a lasting peace amongst the injured pressman and other journalists in the state.

A source (medical expert) from the hospital were Ike Nwosu (Okwuruoha) was rushed to disclosed that the brutalized journalist might loss one of his teeth due to the rough beating he received from the lawmaker and his aides. 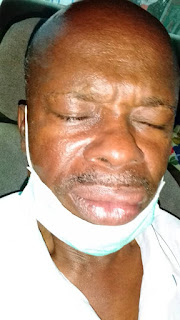 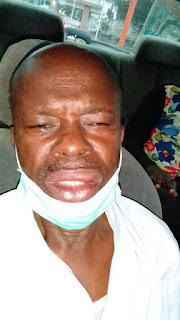