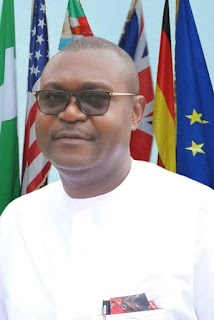 In 1988, Dr. Fabian Ihekweme left the country for India and obtained his Pre- University Certificate (PUC) at Gurunanak Matriculation Higher Secondary School Madras India in 1989 and same year, he was admitted into the prestigious University of Madras India where he obtained his Bachelor of Arts in Political Science and Master of Arts in Political Science in 1992 & 1994 respectively.

Dr. Ihekweme has contributed so much both in human capacity building, political Stability, development of Imo state and of course Nigeria. In 2007, he contested the governorship election in Imo State and has made so many sacrifices for the good of our dear state.

In philanthropy, Dr. Ihekweme's name is already written in gold as he has touched so many lives positively and it is a well known fact that anyone that comes in contact with him has always a great testimony to give about him.

Now as a commissioner, Imo people believe strongly that his appointment will contribute in no small measure to the realization of the big three 'R' concept of Reconstruction, Rehabilitation and Recovery policy of his Excellency Sen. Hope Uzodinma, the Executive Governor of Imo State
ARISE AFRIKA MAGAZINE Profile