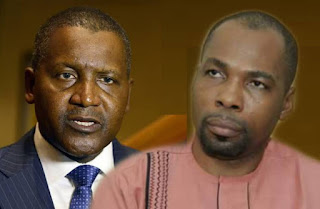 There are several viral videos on the internet, capturing moments Dangote trucks were intercepted or caught smuggling almajiris (otherwise known as Northern beggars) into Southern states, even with the ban on such travels.

But Dangote had, in a letter addressed to Igbo socio-political organization, Ohaneze Ndigbo, denied that his company's trucks were being used to transport almajiris from the Northern part of Nigeria to the South.

In a statement made available to journalists on Tuesday, however, the Igbere TV boss said he was worried over the trend, demanding explanation from Dangote over the influx of almajiris from the North into the East via his trucks, despite the ban on interstate movement.

Anyalekwa, who doubles as National President, Online Media Practitioners Association of Nigeria (OMPAN), wondered how the almajiris, with all the subsisting lockdown rules, were “still transiting into Southeast on Dangote trucks, without being detected.”

According to him, “The open-denial by Alhaji Aliko Dangote that his trucks are not involved in this ugly trend, is not only unfortunate but not surprising. We are left without any doubt that the new invasion has truly commenced.

“I can't comprehend what’s behind this Northern desperation in exporting almajiris to southeastern Nigeria by all means. Is there something we need to know about this move before we are caught unaware?

“It is frightening. These humans (almajiris) are packed like sardines in these trucks heading to the East. The unsightly spectacle are not hidden, they are reported all over the pages of newspapers. Is it that Dangote doesn't read or what?”

Vowing to sue Dangote if the influx is not stopped, the Igbere TV director added, “On Thursday May 7, the Abia state government intercepted 26 people hidden in two Dangote trucks coming into the state. This was widely reported in the media; how come Dangote is claiming ignorance? Just on the 11th of same May, two truckloads of 120 almajiris were intercepted at Gakem border in Cross River State.

“In Enugu, the state government intercepted two vehicles relocating almajiris from North; this happened on the 8. Business Day also reported the intercepting of truckload of almajiris to Abia on May 5. Again on May 13 in Enugu, 15 almajiris were caught on the floor of a trailer, as reported by The Guardian; just to mention but a few.”

Blaming Dangote for the unabated influx, Mr. Anyalekwa recalled how Northern governors threatened to totally ban the Almajiri system in the region, and relocate every almajiri back to their states of origin; wondering if the East is also one of these origins.

“The Northern governors resolved to ‘totally ban’ the almajiri system in the region because of what they termed the “risk that almajiri children are exposed to because of coronavirus” and decided to “…evacuate the children to their parents or states of origin.”

“One may therefore be forced to ask if the Southeast movements are the abodes of the almajiri youths’ “parents” or their “states of origin.” We demand explanation from Dangote,” the Igbere TV boss insisted.

On the increasing rate of coronavirus figures and with more confirmed cases of COVID-19 in the North, the Igbere TV boss said “more worrisome is the health challenges the influx of almajiris pose to people living in the Southern region.”

“Just recently, Kano state returned 419 almajiris to Katsina; 524 to Jigawa and 155 to Kaduna, totalling 1,098. Weeks later, Governor Nasir El-Rufai of Kaduna State admitted returning some 30,000 to their “own states, he said.

“No sooner had these almajiris returned from Kano to Kaduna arrived than El-Rufai disclosed that 65 out of the 169 almajiris tested positive for coronavirus. Other states announced similar findings too.

“Today, aside from Lagos, the epicentre of COVID-19, the next five biggest cases are from the North (FCT included): Kano, FCT, Katsina, Bauchi and Borno. Obviously, the almajiris have become indeed vectors of coronavirus as feared,” the OMPAN national president lamented.
Coronavirus NEWS Nigeria OMPAN