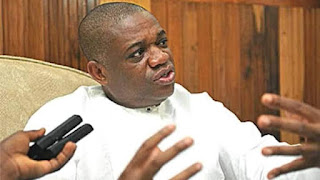 “...In the case of Orji Uzo kalu, we see the hand of Esu, and hear the cry of Jacob. The imprisonment of Sen. Orji Uzo kalu is not because of his corruption case, but because he is being perceived as a threat to some 2023 presidential interests”. That is the assertion of the leader of Awake Defence Action Movement (ADAM), Bro ThankGod Igwekani.

ThankGod Igwekani in a release over the case of Senator Orji Uzo Kalu said though the group which its primary objective is to protect lives and properties of Igbo nation anywhere they are does not support any kind of corruption wether small or big, in public or private organisation, but in the same way would not accept nailing any Igbo son or daughter who is perceived to be a political threat.

He said he keenly followed and observed Orji Kalu's case from his arraignment to the final sentence, in all, and following the way politics is being played in Nigeria, they have come to the conclusion that Orji Kalu's imprisonment was politically motivated and not corruption fight.

They therefore called on Federal Government and concerned institutions to retrace their steps and free him.

“If Federal Government and EFCC are sincere in fighting corruption, and If what they tell us about corruption fight is actually the truth, then they should start from all the public office holders both past and present from the regime of former president Obasanjo to Goodluck Jonathan irrespective of political affiliation, interest or party. If Federal Government and EFCC are truly in the business of fighting corruption, then they should arrest all the past governors from Obasanjo's administration to date, and prosecute them. They should arrest all the past ministers and other political appointees from the same time to now and prosecute them because none of them is free from corruption. We know some of them that were mentioned in the so called EFCC corruption book then, but today nobody heard about it again, they move freely, some are even in government simply because they have government backing.

“So, in as much as we are not in support of corruption, we want the Federal Government and Its agents to stop disfiguring prominent Igbo sons because of political interest.”

“There is corruption in the fight against Boko Haram. What is EFCC doing about the deception and corruption in Boko Haram fight? Tell me what is more corrupt than a group that sheds innocent blood, and Government is deceiving and lying about it. Nothing has been done over the killings and destruction of our people's properties in the North other than paying lips service to it.”

“So what we are saying is that Federal Government should fight corruption holistically, not singling out some who they perceived to be a threat to their political interest. They should equally account for the money they claimed they have recovered”, ThankGod Igwekani, ADAM Leader said in the statement.
NEWS Nigeria POLITICS