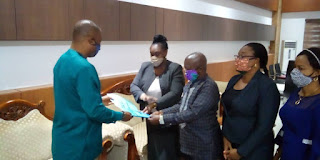 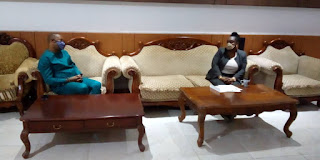 Sustenance of the synergy between the various arms of government has been identified as one of the the most vital ingredients for survival of our democracy and lifewire of any People oriented government.

The Majority Leader Imo State House of Assembly and the Honourable Member Representing Ikeduru  Constituency in the Parliament, Amb. Uche Ogbuagu declares this on his visit to the State's Chief Judge His Lordship Justice Ijeoma Aguguo at the state high court complex Owerri in his quest to seek approval for the rebuilding of Ikeduru High Court Iho.

The Lawmaker, who explains to the Judiciary top notch the delapidated nature of Ikeduru High Court  which has been abandoned by previous administrations, laments the sufferings which litigants from the  area face in prosecuting their cases in nearby courts as a misnomer.

Amb. Ogbuagu decries the pile up of cases from the area hanging in other courts outside Ikeduru  jurisdiction as unacceptable and delays the accessing of Justice by his constituents.

He makes it clear that rebuilding the court is one of the most important projects close to his heart, which he promised the people during his electioneering period and as a man of his words, he would want the project realised as soon as possible.

For her part, the highly elated Chief Judge of the state thanks the Majority Leader for his desire to uplift Ikeduru and most especially the High Court. She describes this as a welcome development and sign of good omen to the disposal of cases from the area.

Justice Aguguo, who explains her knowledge of  Ikeduru having served in the area as Magistrate in the early 90's, praises Amb. Ogbuagu for coming to the rescue of the Judiciary, just as she hands over to him the prototype of approved court complexes in Imo State.

She prayed God to  see the Lawmaker through in the realization of this project and in his Legislative duties.

Amb. Uche Ogbuagu was accompanied on the visit by an Ikeduru born Legal Luminary  and the Consultant to Uche Ogbuagu High Court building project, Dr Ken Uzoechi,  Special Assistants  on Projects in the office of the Majority Leader, Paul Ezihe and Anthony Osuji.

Work on the court project begins in May.
IMO State NEWS POLITICS