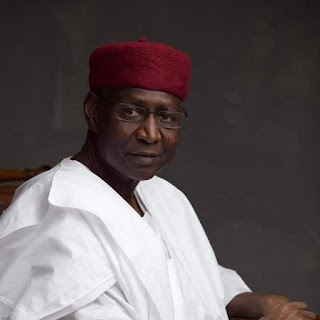 In a statement on Saturday morning, the Presidency announced the passage of the Chief of Staff to the President, Mallam Abba Kyari

The deceased had tested positive to the ravaging COVID-19 and had been receiving treatment. But he died on Friday, April 17, 2020.

Funeral arrangements will be announced shortly.

He was born in 1938. He was a Nigerian politician who served as Chief of Staff to President Muhammadu Buhari.

Kyari worked for the law firm Fani-Kayode and Sowemimo for some time after his return to Nigeria.

From 1988 to 1990, he was Editor with the New Africa Holdings Limited Kaduna.

In 1990, he served as a Commissioner for Forestry and Animal Resources in Borno State.

From 1990 to 1995, Kyari was the secretary to the board of African International Bank Limited, a subsidiary of Bank of Credit and Commerce International.

Kyari was an executive director in charge of management services at the United Bank for Africa, and was later appointed the chief executive officer. In 2002, he was appointed a board director of Unilever Nigeria, and later served on the board of Exxon Mobil Nigeria.

In August 2015, Kyari was appointed Chief of Staff to President Muhammadu Buhari. Kyari died in a Lagos hospital on 17 April 2020. He died from complications related to COVID-19.

May his gentle soul rest in perfect peace. 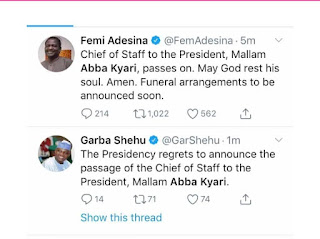