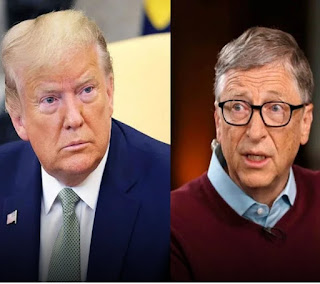 The billionaire co-founder of Microsoft Corporation and philanthropist, Bill Gates has cautioned the President of the United States, Donald Trump against ending its funding of the World Health Organization (WHO).

Donald Trump is reportedly unhappy with the handling of the Coronavirus outbreak by the WHO. He had accused the WHO of being biased in favor of China.

He also accused the UN body of mismanaging and covering up the spread of the virus after it emerged from China, and said the WHO must be held accountable, BBC reports.

“I am directing my administration to halt funding while a review is conducted to assess the World Health Organization’s role in severely mismanaging and covering up the spread of the coronavirus,” Mr. Trump told a news conference at the White House.

But Bill Gates has described the move as dangerous, saying that the WHO has been working to flatten the curve.

“Halting funding for the World Health Organization during a world health crisis is as dangerous as it sounds,” Gates said on his Twitter handle.

“Their work is slowing the spread of COVID-19 and if that work is stopped no other organization can replace them. The world needs WHO now more than ever,” Gates added.


According to BBC reports, the United States is the biggest donor to WHO. It contributed about $400m in 2019 – just under 15% of WHO’s total budget. On the other hand, China only donated about $76m in assessed contributions and about $10m in voluntary funding