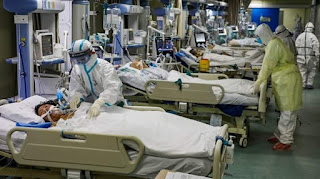 A classified intelligence submitted to President Donald Trump said China has been under-reporting the number of infections and casualties within its borders. The fresh intelligence submitted to President Donald Trump has accused the Chinese government of manipulating its data on the coronavirus pandemic, the report said on Wednesday.

Bloomberg cited United States intelligence sources as claiming that China’s disclosures on coronavirus incidents have been deliberately downplayed to deceive the world that its approach towards controlling the outbreak was effective.

The Trump administration has not provided details of the intelligence or even publicly acknowledged it, but it echoed some of the concerns that U.S. officials have raised about China’s handling of the crisis.

Mike Pompeo, the secretary of state, and other senior American government officials repeatedly suggested that China cannot be trusted to provide accurate information that could aid other countries in combatting the pandemic.

“My concern is that this cover-up, this disinformation that the Chinese Communist Party is engaged in, is still denying the world the information it needs so that we can prevent further cases or something like this from recurring again,” Mr Pompeo said last month.

The virus broke out in Wuhan, central China, in November 2019. There have been reports that in the first weeks that were crucial to containment efforts, China suppressed information about the virus from leaking out.

As of Wednesday afternoon, China confirmed about 82,300 cases, out of which over 76,000 have recovered. The country’s number of casualties is placed at about 3,200. Both China’s death and infection numbers are behind the U.S., Italy and Spain.

Chinese epidemiologists who tried to warn Chinese authorities and foreigners about the outbreak were suppressed or ‘disappeared’.

Experts said the country’s tactics worsened the situation because it did not give other countries enough time to guard against the introduction of the virus into their population.