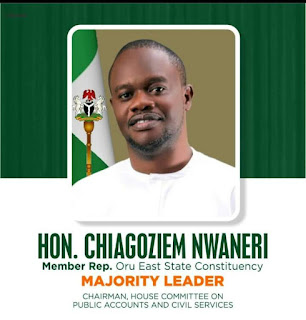 The group stated that Hon Chigoziem Nwaneri has been able to inspire and impact the society meaningfully  even before his foray into politics.

The publisher of Arise Africa Magazine, Mr Ikechukwu Anyanwu described him as a down to earth man who is interested in people irrespective of  status.

The organizers of the annual event applauded his giant efforts towards youth empowerment and is delighted to unveil
Hon Chigozirim Nwaneri  as  FAA Exceptional Lawmaker of the year!


The Exceptional Lawmaker is at home with his people.

He is accessible, humane and God fearing.
No wonder, God keep blessing him.

We look forward to celebrating you
NEWS