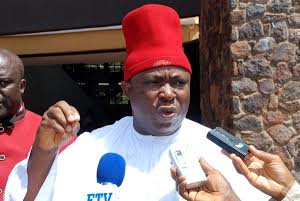 Umeh said, “I have been here, and I can say, I’m happy. Because the atmosphere here is peaceful. There is nothing here to indicate that anybody wants to disrupt the burial rites of our late traditional ruler, Eze Israel Kanu.

“Burial is a solemn thing, and the federal government has done well allowing us bury our brother and his wife. That is the way it should be because death awaits everybody. I read about the altercation between Nigeria police and the leadership of IPOB on social media and newspapers, but it didn’t stop us from attending this burial.

“It is our obligation to bury somebody in true Christian way. For the fact that the government allowed us to bury them, we say thank you"

MY TAKE: On what basis do you thank Buhari for allowing the parents of Mazi Nnamdi Kanu to be buried peacefully. Is it that the dead should not be buried or it is now the onus of Federal Government to permit who should be buried and who should not be buried? Your statement is not making sense dear Senator. Must you people bring Nigeria dirty politics into everything that happens in Igbo land just to gain Fulani Caliphate favour. It is the duty of the living to bury the dead. I can't imagine a Fulani Senator thanking Federal Government for allowing them to bury  an Emir and his wife, they contributed to their dead directly or indirectly. What  nonsense?


When the Federal troops invaded Afaraukwu in Umuahia Abia State, precisely Mazi Nnamdi Kanu's family house and killed over 28 people, you should have thanked Federal Government for killing those innocent souls. Or did you condemn such carnage and barbarism unleashed on the innocent people?
Am very saddened that the acclaimed Igbo political Leaders have consented and accepted mental slavery and subjugation meted by Fulani Caliphate.
Why are you people so selfish  and self  centred. You people's selfishness is really becoming demonic. None of you musters courage in condemning the act of genocide being committed against our people. Except Senator Enyinnaya Abaribe whom I chose to call Enyi-Umunneya, none of you ever condemns the killings of unarmed IPOB members who are tagged Terrorist group. What a shame? Yet you a supposed elder open your mouth to thank Federal Government for allowing the peaceful burial of the parents of Mazi Nnamdi Kanu, which you thought would have turned to battle field. If the blood thirsty and bloodletting Bokoharam and Fulani herdsmen are pardoned and restored into the society, how much more non- violent group like IPOB, who are agitating for equity, fairness and Freedom.

According to your self seeking impressive political statement, you claim to be a Christian. Let us go biblical.  Moses just like Mazi Nnamdi Kanu, was raised by God Almighty to lead a historic March of freedom that saw the birth of one of the most powerful nation today called Israel. For Moses to accomplish such a rare feat, he rejected the princehood  of Egypt as well as its Luxurious life in the palace and stood out to suffer for the freedom of his people, the Israelites. In similitude, Mazi Nnamdi Kanu as a prince rejected the Luxurious life even in the far away UK and came to speak and work for the emancipation of our people from the slavery and subjugation of Fulani Caliphate and you and other Igbo politicians despise him  because you people find it hard to let go the pieces of  cake  of Egypt you people feed fat from which Nigeria today represents.

Unlike you, self centered Senator, Mazi Nnamdi Kanu has sacrificed a lot to advance the Freedom of our people from this jungle called Nigeria including his dear parents, whom you shamelessly congratulate the Federal Government for allowing they peaceful burial. Same Federal Government who sacrifice the life of Southern soldiers to capture Bokoharam sects, only to release them to continue in their unrepentant murderous act of carnage, yet your selfish person don't speak against such atrocious acts. How can a country succeed with this kind of hypocritical Leadership dispositions. You people love lies, eat lies and marry lies. You people parade yourselves as Leaders without conscience and morality.

You people are afraid to say the truth over this unworkable union called one Nigeria.

Mazi Nnamdi Kanu is an epitome of all the good characteristics of what a Leader should be. To me, a Leader is someone who put the interest of his people above his personal pleasurable interest. And that is what Mazi Nnamdi Kanu stands for.

Today, the South East is being invaded by the murderous Fulani herdsmen yet you political self acclaimed Leaders cannot muster the courage to establish a regional security outfit. What a shame? It seems that any of you that want a favour from Fulani Caliphate, dubiously attach your greedy self to Mazi Nnamdi Kanu's activities so as to shoot yourself into your slave Caliphate masters. This nonsense must stop.
POLITICS