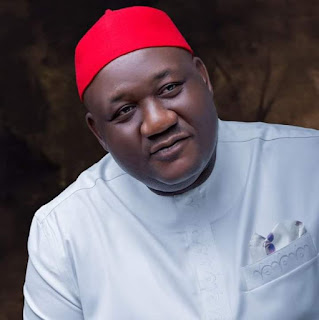 Politicians across Nigeria dominated the scene and had all the bigwigs present. The burial which held at Ihitte Uboma,  Imo State paraded a large and unprecedented crowd of sympathizers who thronged to bid Late Senator Benjamin Uwajumogu a final goodbye

Senator Benjamin Chukwuemeka Uwajumogu was born in 1968 (52 years) to the family of a famous and successful business magnet, Chief B.O. Uwajumogu of Uwajumogu and Sons Ltd

He had his early education at Library Avenue Primary School Umuahia, Abia State and his secondary education at Ikerejere Secondary School , Ihitte Uboma and had his Bsc in Economics from University of New Jersey, USA

He was an intellectual political giant, a sociopolitical crusader, businessman and  philanthropist.

A community leader and chairman of Eastern Comfort Hotels, Umuahia, Chief Benjamin Uwajumogu contested and won the 2011 Ihitte Uboma State Constituency election under the platform of the Peoples Democratic Party, PDP and later emerged the Speaker of Imo State House of Assembly by switching party to then ruling party in the state, the All Progressive Grand Alliance, APGA, under the leadership of His Excellency, Owelle Rochas Okorocha.

He recontested in 2019 and was returned elected.

A serving senator of the Federal Republic of Nigeria, and Senate Committee chairman on Labour and employment, Chief Benjamin Chukwuemeka Uwajumogu died on the 18th of December, 2019.

His death came to Imo North  and Nigeria as a rude shock. We really shall miss greatly this good man