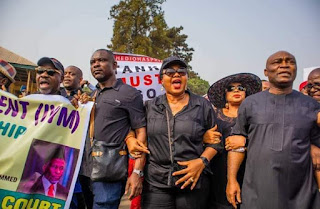 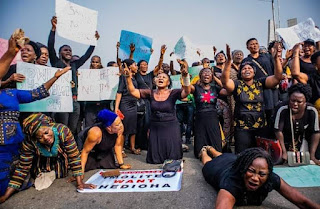 Members of the Peoples Democratic Party in their scores on Sunday protested against the sacking of Emeka Ihedioha by the Supreme Court and the declaration of Hope Uzodinma of the All Progressives Congress , as the duly elected governor of the state .

The PDP members in Imo , Taraba , Abia and Ogun states urged the apex court to reverse itself and declare Ihedioha the winner .

Police and military authorities in the state also positioned their personnel in strategic locations to forestall a possible breakdown of law and order. 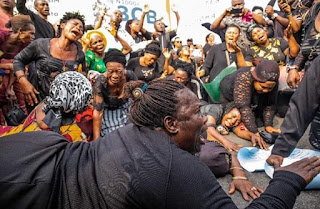 The PDP protesters who were decked in black attires , engaged in procession round the state capital , calling on the jurists to revisit the Tuesday ’s verdict which sacked Ihedioha .

They vowed that the protest would continue if the apex court refused to resolve the Imo governorship debacle in their party ’s favour .

A member of the House of Representatives , Henry Nwawuba, who spoke to journalists, alleged that the Supreme Court justices had murdered democracy in the state .

He said , “I believe that the Supreme Court must redeem the judiciary . Since the judgment was delivered , the state has become a graveyard . This is unlike what happened when the PDP was holding sway .

“How the Supreme Court justices gave victory to a candidate who came fourth at the election remains a mystery to many of us . We call on them to revisit the Imo case and do justice .”

The PDP woman leader in the state , Maria Mbakwe , who betrayed emotion while speaking to journalists, said , “I have never seen this kind of injustice in the last 50 years that I have been living in Imo State .”

He described the verdict as “an utter desecration of judicial tenets and values culminating in the Supreme Court manufacturing votes and donating to the APC candidate , Uzodinma , against the mandate of the Imo people who elected Ihedioha as their governor .”

Bala -Kona said , “If the Supreme Court ruling which removed a duly elected governor of Imo State is left unchallenged , it will be the end of our hard -earned struggle for democracy .

“The PDP in Taraba State stands with the people of Imo State and our governor who was removed forcefully by the Supreme Court in all the steps being taken to reverse this injustice .”

Meanwhile , a faction of the PDP in Ogun State on Sunday rejected the judgment that sacked Ihedioha .

The chairman of the faction backed by the national leadership of the PDP , Sikirulai Ogundele , led the aggrieved members of the party in a protest in Abeokuta , Ogun State capital , described the verdict as a fraud.

Some of the cards read , ‘Imo judgment is a fraud,’ ‘ Our judicial system is not a department of the APC ,’ ‘ Tanko must go’. ‘ Stop robbing the PDP of its mandate ,’ and ‘ Stop influencing the judiciary .’

In Abia State , the PDP members on Sunday asked the Supreme Court to reverse itself over the removal of Ihedioha as the governor of Imo State .

Leading the peaceful protest across major streets in Umuahia , the chairman of the party in the state , Chief Johnson Onuigbo, said , “We gather to express our anger over the Supreme Court judgment on Imo State .

“We are concerned as it is not only about Abia and Imo states , but about Nigeria and because we are Nigerians . Injury to one is injury to all .

“We are demanding that the Supreme Court reverse itself .”

Also , a coalition of civil rights organisations under the aegis of the Alliance for Preservation of Democracy on Sunday described the judgment as political .

They also accused the apex court of performing the function of the Independent National Electoral Commission when it accepted uncertified results it relied on to sack Ihedioha .

The group said , “By declaring Hope Uzodinma as the winner , the court had usurped the responsibility of INEC .”

The Director , Advocacy and Communication of Make A Difference Initiative , Lemmy Ughegbe , spoke on behalf of the APD, during a press briefing held in Abuja .

He said , “Judgments are now more political , rather than relying on the existing laws . Judges are now ruled by fear of what could befall them if they act contrary to the interest of those in power .

“Today , judgments are more political than judicial . Judges are ruled by fear of what could befall them if they act contrary to the famed ‘ body language ’ of those that wield executive powers .

“It is in this sense that we are concerned . We challenge all Nigerians to come together and seek for ways to save the judiciary from self - destruct.”

The PDP in Imo State also on Sunday said the Supreme Court was destroying the country ’ s democracy with its Tuesday judgment .

The state Publicity Secretary , Damian Opara , said the justices of the apex court had “ridiculed and annihilated democracy ” by sacking Ihedioha from office .

He said , “Arising from a meeting on Friday , the party described as unbelievable , ridiculous and annihilation of democracy , the decision of the apex court to void the lawful election of its candidate , Emeka Ihedioha , who polled 276 ,404 votes and awarded victory to Hope Uzodimma of the APC with just 96 ,458 votes.

“The party in the state finds it difficult to understand how the Supreme Court arrived at its verdict , even to the point that the seven panelists who sat on the petition gave a unanimous judgment .”
There were also protests by the PDP members in Anambra and Katsina states .
The protesters who turned out in large numbers called for the reversal of the Supreme Court ’s judgement and the reinstatement of Ihedioha as the governor of Imo State .

They called on the President , Major -General Muhammadu Buhari ( retd .) to sustain democracy in Nigeria .

APC chief knocks Yakassai
A chieftain of the APC in Imo State , Franklin Ibeh , has said that an elder statesman , Tanko Yakassai , embarked on a “fruitless voyage ” in criticising the Supreme Court ’s verdict .

Ibeh said , “The position of the elder statesman on the Imo governorship debacle is highly regrettable. The Supreme Court justices were meticulous in their judgment . There is no gain saying the fact the state now has a governor it had long desired to have .
“The governor , Hope Uzodinma , is an ideal governor for Imo State .

“This is the first time we are having a governor who is not greedy , selfish and not interested in converting people ’s funds to himself , children and great grandchildren.”