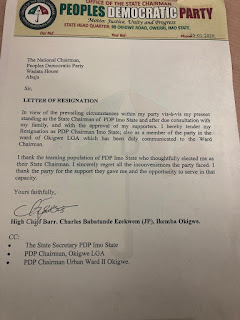 Hon. Ezekwem is dumping the party amidst speculations that Hon. Ihedioha is heading back to supreme court with more facts, and while many PDP faithfuls are being hopeful that the apex court will overturn her decision to sack Emeka Ihedioha, losing a state party chairman will be another heartbreak.

Charles Ezekwem’s political destination is not known, although odds favour APC, who are plotting to cripple PDP in the state.


Already, Gov. Hope Uzodinma of APC who was formerly PDP Board of Trustee member has appointed, Charles Anyaehie, a former PDP state Chairman in his Cabinet, and their former network in PDP could be used to cripple it’s structures across the state.