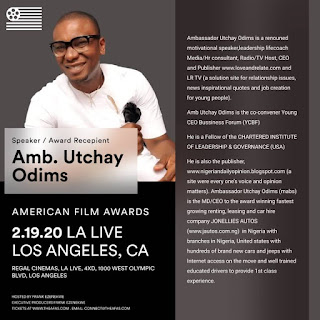 The glamourous event will feature top influencers in both Hollywood and Nollywood industry alongside Top Inventors, Celebrities from  across the globe

The glamorous Award event will recognise and reward excellence in creativity on the continent of Africa, United States and Europe. As one of the most respected and most coveted amongst filmmakers and enthusiasts in African & American film and movie community

Amb Utchay Odims will be among distinguished personalities to be honoured at the event.

Congratulations from all of us at Arise Africa to CEO of Jautos for an honours well deserved. Keep blazing the trail in Africa

Africa is indeed arising with the likes of you.
Gist NEWS